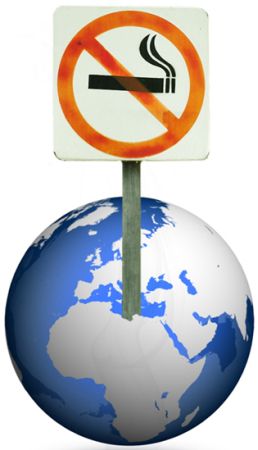 CANSA is Fighting for a Tobacco-Free World

CANSA has always played a major role in anti-tobacco legislation. See highlights below:

CANSA partnered with the National Council Against Smoking and the Heart and Stroke Foundation of South Africa, to establish the Tobacco Action Group (TAG) in 1991. TAG has been at the forefront of securing tobacco control legislation in South Africa.

In 1999, CANSA played a major role in helping to ban advertising and sponsorship activities of tobacco products.

CANSA was very influential in advocating no smoking or limiting smoking in public places.Staff attended hearings around the country and spoke in favour of the Bill that made a big difference in getting the provincial legislatures to pass the Bill in parliament in 2008.

CANSA was awarded the 2009 World No Tobacco Day Achievement Award presented by the World Health Organization (WHO) in recognition of CANSA’s accomplishments in the fight against tobacco use in South Africa. Read the key points of the ammendments to the Tobacco act – know the law….

In May 2011, as part of CANSA’s watchdog role, CANSA wrote a letter to the Minister of Health regarding an ‘illegal’ cigarette campaign doing the rounds, urging the Minister to investigate and ban this campaign, as it indirectly and illegally encouraged the public to purchase legitimate cigarettes.

CANSA welcomed the ruling against a giant in the tobacco industry by the Advertising Standards Authority of South Africa (ASA) and Judge J Phatudi in the Northern Gauteng High Court. In response to various complaints received from the public, the ASA ruled that the advertising message conveyed by British American Tobacco South Africa’s (BATSA) recent campaign against illegal cigarettes was misleading in that it linked the sale of illegal cigarettes to serious and violent crimes. The ASA pointed out that the complaint against BATSA’s alleged efforts to illegally encourage the public to buy legitimate cigarettes, must be levelled at the regulatory authority responsible for administering the Tobacco Products Control Act. Read more…

CANSA was given the green light from the Secretary of Parliament, who confirmed that CANSA representatives would be allowed to engage with parliamentarians at Parliament on World No-Tobacco Day (31st May 2011), to hand out promotional material and to provide each of them with a No-Tobacco sticker to wear on the day.

CANSA encouraged its members to support the ban on 2nd hand smoking in public places BEFORE 29th June 2012 – the draft regulations were published by the Minister of Health, Dr. Aaron Motsoaledi, on the 30th March 2012.

How to Lodge a Complaint Against Illegal Smoking

Read more… – it is YOUR RIGHT to a smoke-free world!