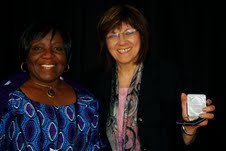 This is in recognition of CANSA’s accomplishments in the fight against tobacco use in South Africa. Every year, the World Health Organization (WHO), recognises individuals or organisations in each of the six WHO Regions for their accomplishments in the area of tobacco control. This recognition takes the form of “Special Director-General Awards” and “World No Tobacco Day Awards”. Photo – top right: CANSA CEO, Sue Janse van Rensburg (right) with Dr Stella Anyangwe, World Health Organization Representative in South Africa, receiving the 2009 “World No Tobacco Day Achievement Award”. 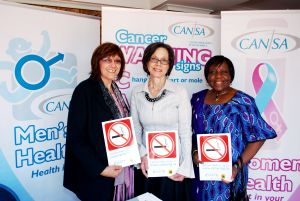 “Tobacco is the world’s leading preventable cause of death and the only product that kills when used exactly as the manufacturer intends,” Dr Anyangwe says.

Worldwide, more than 5 million people die from tobacco each year – more than from HIV/AIDS, malaria and tuberculosis combined.  Unless urgent action is taken, there will be more than 8 million annual deaths globally by 2030, with more than 80% of those in developing countries. Up to half of all smokers will die from a tobacco-related disease.”

“Research shows that up to 90% of cancers are caused by environmental factors, of which smoking is the most prevalent,” says CANSA CEO, Sue Janse van Rensburg. “Over 44 000 South Africans die from tobacco-related diseases annually and many more become ill from using tobacco products and inhaling second-hand smoke. Smoking is the main cause of cancer.  The good news is that most of these deaths are preventable by giving up smoking in time,” Van Rensburg concludes.