No Alcohol is Best – The Hidden Toll of Alcohol

Most people are not aware that drinking any type of alcohol (even in small amounts) increases cancer risk.

Alcohol use and abuse together pose significant health problems.

CANSA urges the public to consider the toll that alcohol is taking on their bodies and how it affects those around them.

The more alcohol an individual drinks, the higher their risk for cancer, so individuals are encouraged to lower their alcohol intake or even quit. ‘Binge’ drinking (having five or more standard alcoholic drinks on a single occasion), adds to that risk substantially.

The Youth Risk Behaviour Survey (2011) carried out with Grade 8 to 11 learners attending public schools in all nine provinces of South Africa, indicated that youth alcohol usage is particularly concerning.

The study also found that the higher the grade / age of the learner, the more likely it was that he or she consumed alcohol. The Youth Risk Behaviour Survey also found that 18 % of learners participating in the survey, had sex post alcohol consumption.

Alcohol Puts You and Others at Risk:

Drinking not only affects your health, but may also have negative consequences for those around you. In South Africa, alcohol is considered to be the most widespread and harmful drug of abuse. In 2015, alcohol was declared the 5th leading cause of death and disability in South Africa.

This is due to the fact that alcohol influences unsafe sexual practices (including transmission and progression of sexually transmitted diseases) and interpersonal violence. These two factors are among the top two contributors to disability and death, with alcohol itself being the 3rd largest contributor to disability and death, accounting for 7 % of the SA health burden. Of the 7 % of the disease burden attributable to alcohol, 3.4 % are related to cancers. Furthermore, alcohol use is linked to personal injury (including those due to road crashes), and suicides. Alcohol consumption is also associated with destruction of families and disruption of communities.

Here we share the facts with you in the hope that you will be motivated to quit drinking alcohol & to take charge of your health:

1. Think Through Why You Should Quit

Quitting alcohol can have a positive effect on your health, lifestyle and relationships. #StartWhereYouAre:

NB: Remember that drinking any type of alcohol (even in small amounts) increases cancer risk.

Perhaps you realise that you are drinking too much and you would like to quit – you will need support to break your addiction.

And if at first you don’t succeed, evaluate where you think things went wrong, put measures in place to prevent the same mistake into the future and most importantly, try, try and try again!

4. Play Your Part in Alcohol Control:

South Africa is currently considering a liquor amendment bill to reduce per capita consumption, including raising the national minimum legal purchase age from 18 to 21 years. Increasing the cost of alcoholic beverages through taxation and restricting or banning marketing and advertising of alcoholic products are deemed cost effective strategies in alcohol control. #SupportAlcoholControl

CANSA made a submission and welcomed the proposed amendments and the banning of sale to persons under age 21 and requested that the Minister prescribes messages on alcohol container labels that reflect the harmful effects of alcohol consumption including cancer risk. It also urged the Minister to ban alcohol consumption in public and private institutions of learning, at functions, and for the purpose of raising funds and called for an outright ban on all forms of advertising and promotion of alcohol on all media platforms and that there be standardisation in all provinces. #CANSAadvocacy

We need healthier future generations, who are able to exercise smart choices. Parents are advised to keep communication channels open between themselves and their children, also demonstrating responsible behaviour and how to manage stress in positive ways.

They should also talk to them about the disadvantages of alcohol abuse including that it increases personal vulnerability, cancer risk, and risk of disability and death. 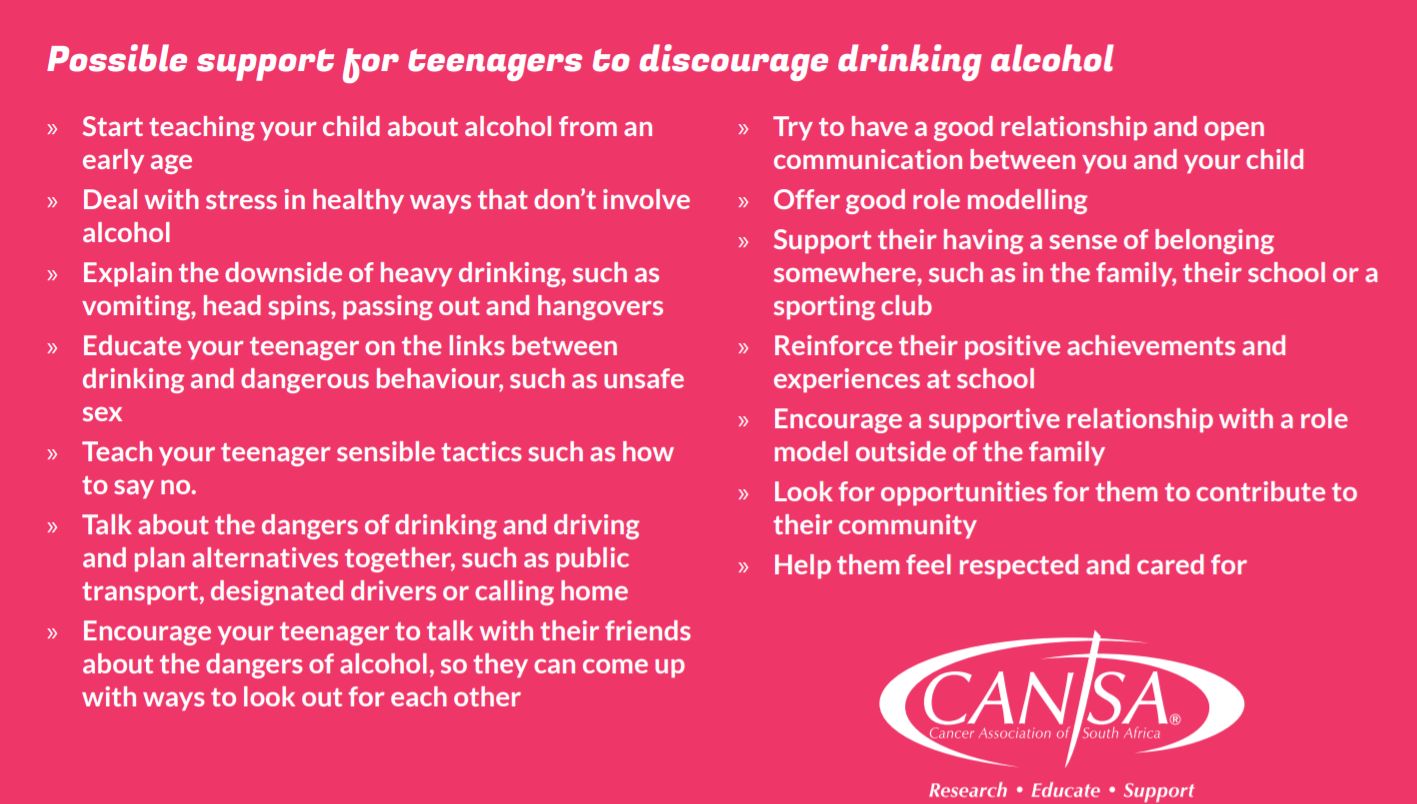 Has Cancer Touched Your Life?

Cancer affects one in four South Africans, through diagnosis of family, friends, colleagues or self.

We want you to know that you are not alone and that we would like to support you and your loved ones, regardless of how cancer has touched your life.