CANSA Batting for a Tobacco-Free World 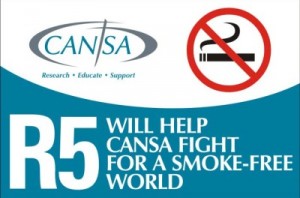 2011: CANSA welcomes recent rulings against a giant in the tobacco industry by the Advertising Standards Authority of South Africa (ASA) and Judge J Phatudi  in the North Gauteng High Court.

The ASA however pointed out that the complaint against BATSA’s alleged efforts to illegally encourage the public to buy legitimate cigarettes, must be levelled at the regulatory authority responsible for administering the Tobacco Products Control Act.

CANSA is of the opinion that the Minister of Health is custodian of the health of the greater public and has therefore lodged a complaint with Dr Aaron Motsoaledi and the Ministery of Health. “CANSA believes that by discouraging the sale of illegal cigarettes, BATSA’s advertising campaign contravened the Tobacco Products Control Act (which prohibits the advertising of tobacco products) as it indirectly and illegally encouraged the public to purchase legitimate cigarettes,” commented Sue Janse van Rensburg, CANSA CEO.

“What is obvious is that the laws we have now must be leveraged to stop tobacco companies from marketing their harmful products to the public,” Janse van Rensburg added.  “CANSA therefore welcomes the ASA’s ruling, as well as Judge J Phatudi’s ruling against BATSA in favour of the State when he delivered his verdict in the Northern Gauteng High Court in the case of BATSA vs The State in which BATSA challenged the ban of tobacco advertising on a one-on-one basis to be unconstitutional.”

“South Africa’s sophisticated tobacco laws are hailed for being proactive by international legislators,” Janse van Rensburg added. “With more than 144 000 South Africans dying of tobacco-related deaths every year, CANSA is more determined than ever to protect the public’s health. We therefore tirelessly advocate for a tobacco-free society. In fact, everyone can support our plight against tobacco by joining CANSA in celebrating World No Tobacco Day on Tuesday 31 May,” she concluded. CANSA partnered with the National Council Against Smoking and the Heart and Stroke Foundation of South Africa, to establish the Tobacco Action Group (TAG) in 1991. TAG has been at the forefront of securing tobacco control legislation in South Africa.

Join CANSA’s fight against tobacco use in South Africa

World No Tobacco Day 2011: R5 will help CANSA fight for everyone’s rights to a smoke-free world!  Join CANSA and help make a difference in the lives of millions of fellow-South Africans who have no choice but to endure the harmful effects of second-hand smoke. Stickers can be purchased at any CANSA office nation-wide.

The World Health Organization (WHO) recognises CANSA’s fight against tobacco in South Africa and awarded CANSA with the 2009 World No Tobacco Day Achievement Award.