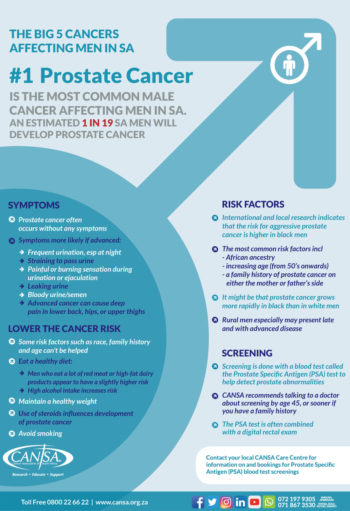 It’s of great concern that the number of men being diagnosed with late stage cancer is on the rise.

Knowledge is power and can change the lives of men drastically if they are aware of early warning signs and symptoms of male cancers.

Men need to be pro-active about their health and should recognise warning signs. We encourage monthly testicular self-examinations, annual medical check-ups and cancer screening for early detection, as symptoms don’t always present until cancer has spread. Men also need to lead a healthy, balanced lifestyle, cutting out lifestyle factors that increase their cancer risk.

We urge men and male cancer Survivors to encourage one another to invest in their health and to ask their doctor for advice on specific cancer screening tests relevant to their age, medical and family history.

CANSA focuses the spotlight on prostate cancer, the most common male cancer globally and locally and showing significant increases.* According to the National Cancer Registry, South African men have a 1:19 risk for being diagnosed in their lifetime. International and local research indicates that the risk for aggressive prostate cancer is higher in black men.

Contact your local CANSA Care Centre for health awareness materials and arrange for screening for prostate, colorectal or skin cancer, or ask about scheduled visits to provide screening via our MANVan and Mobile Health Clinics, if you live in a remote area.

We provide a counselling service dedicated to providing advice to cancer Survivors. Speak to a counsellor at your local CANSA Care Centre. Phone our Toll Free Call Centre on 0800 22 6622, or email us at info@cansa.org.za. You can also join our Champions of Hope Facebook Group for cancer Survivors & chat to peers who are facing similar challenges.

The five leading types of cancer that indiscriminately afflict men in South Africa are:

The lifetime risk for Prostate Cancer in men in South Africa, is 1 in 19, according to the 2014 National Cancer Registry.

Prostate cancer, is the most common male cancer globally and locally and showing significant increases. International and local research indicates that the risk for aggressive prostate cancer is higher in black men.

The prostate is a walnut-sized gland of the male reproductive system, located just below the bladder. Prostate cancer often grows very slowly and may not cause significant harm, but some types are more aggressive and can spread quickly without treatment. In the early stages, men may have no symptoms. Later, symptoms can include frequent passing of urine, especially at night; difficulty starting or stopping urination; weak or interrupted urinary stream; painful or burning sensation during urination or ejaculation; blood in urine or semen. Advanced cancer can cause deep pain in the lower back, hips, or upper thighs.

Risk factors for prostate cancer include age, ethnicity, family history, being obese or overweight and some dietary factors appear to increase risk. Men can lower their risk of prostate cancer by eating a healthy diet (including lots of fruit and vegetables), maintaining a healthy weight and limiting red meat and high fat dairy products.

Prof Riana Bornman, Senior Research Professor at the University of Pretoria’s School of Health Systems and Public Health and Prof Vanessa Hayes, a Genomicist from the Garvan Medical Institute for Medical Research in Sydney, Australia, focused their research on prostate cancer men of black and Khoisan descent in Southern Africa to better understand the possible links between prostate cancer and African ancestry.

CANSA is investing in research in the high incidence of prostate cancer and is funding the Southern African Prostate Cancer study (SAPCS) conducted at the University of Pretoria. This study will contribute to understanding of prostate cancer risk, disease progression and outcomes specifically in the South African population. CANSA is also coordinating the IRONMAN (International Registry for Men with Advanced Prostate Cancer) study, funded by Movember Foundation and sponsored by the Prostate Cancer Clinical Trials Consortium. It will contribute to a large global study of 5000 men, evaluating the treatment and patient-reported outcomes for men with advanced prostate cancer. 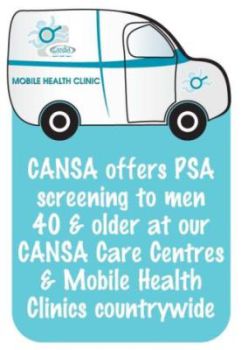 Although most enlargements of the prostate are not cancerous, regular screening is essential.

Prostate Specific Antigen (PSA) is a protein produced by both cancerous (malignant) and non-cancerous (benign) prostate tissue. High PSA levels may indicate inflammation of the prostate or even cancer.

A blood test can establish if PSA levels are raised. PSA tests are available at most CANSA Care Centres across the country and via CANSA’s Mobile Health Clinics and Hollard MANVan. 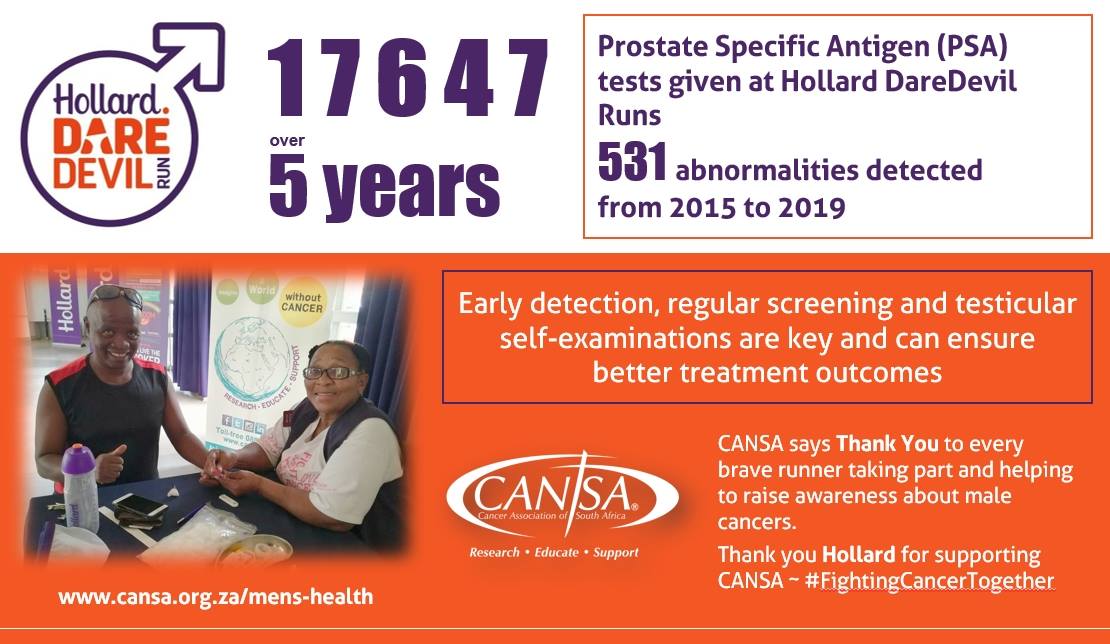 Men aged 50 (40 – 45 for those at high risk, such as men with a family history of Prostate Cancer) should be examined annually.

A doctor examines the prostate through the rectum to check for any prostate lumps or abnormalities.

Athlone Grootboom, prostate cancer Survivor and member of CANSA Survivors – Champions of Hope Facebook Support Group: “Prostate cancer is not a walk in the park. I was diagnosed 3 and a half years ago. I went through several surgeries, tests, radiation and chemotherapy with its side effects. It’s a long road and a learning process. It’s better to get the recommended PSA tests!”

Dennis Feldman, prostate cancer Survivor, and member of CANSA Survivors – Champions of Hope Facebook Support Group: “My physician included a PSA test when I turned 50. At age 60 he called me to say I had elevated PSA levels and should see my urologist. After a biopsy six months later, I was diagnosed with early stages of prostate cancer. I HAD NO SYMPTOMS WHATSOEVER. If my physician had not annually included the PSA test, I would not have known I had cancer. I had surgery in 2012 and have had a PSA of 0.02 since then. I have had NO side effects. EARLY DETECTION IS A MUST. Many men are afraid to have a PSA test – please don’t; it can save your life.”

Gavin Tearne, prostate cancer Survivor and member of CANSA Survivors – Champions of Hope Facebook Support Group: “My PSA count doubled at age 54. Every male should go for yearly check up!”

Colorectal cancer (cancer of the colon or rectum), is the second most common cancer and it is estimated that 1 in 79 SA men will develop colorectal cancer according to the NCR 2014. In early stages symptoms are not present, however when they do occur, they include a change in bowel habits, rectal bleeding, stomach pain, weakness, and weight loss.

CANSA encourages early detection and screening by means of a colonoscopy, starting at age 50 and repeated every 10 years depending on the individual’s risk factors. Faecal occult blood tests are offered at most CANSA Care Centres that look for microscopic blood in the faeces, which may be a sign of a growth, inflammation or bleeding in the digestive system.

Coming in third is lung cancer with estimates that 1 in 80 SA men will develop lung cancer, according to the NCR 2014. When symptoms appear, they include shortness of breath, cough, a change in sputum, chest pain, noisy breathing, hoarseness, and coughing up blood. Smoking accounts for the majority of preventable lung cancers, and the best way to prevent the disease is to not use tobacco products and avoid second-hand smoke. #NoTobacco

The most common AIDS-related cancer world-wide, is Kaposi Sarcoma (KS) which is the fourth most prevalent cancer in South African men according to the NCR 2014. Approximately 1 in 320 South African males are affected with KS which sees patches of abnormal tissue grow under the skin, in the lining of the mouth, nose, throat or in other organs. About one-third of people with classic KS develop another cancer which can be fatal.

And the fifth most common cancer in South African men is bladder cancer affecting 1 in 152 men, according to the NCR 2014. The largest risk factor that can be avoided is smoking, which doubles the chance of bladder cancer. No screening is available, however blood in the urine, a change in urine colour, the need to go frequently and burning pain are some of the symptoms.

The lifetime risk for Testicular Cancer in men in South Africa, is 1 in 1 798, according to the 2014 National Cancer Registry.

Most Testicular Cancers can be detected early – a lump or swelling may be the first sign that a medical practitioner should be consulted.

Men from the age 15 to 49 years need to examine their testicles each month, preferably after a bath or shower, to feel for any pea-sized lumps that could indicate Testicular Cancer. 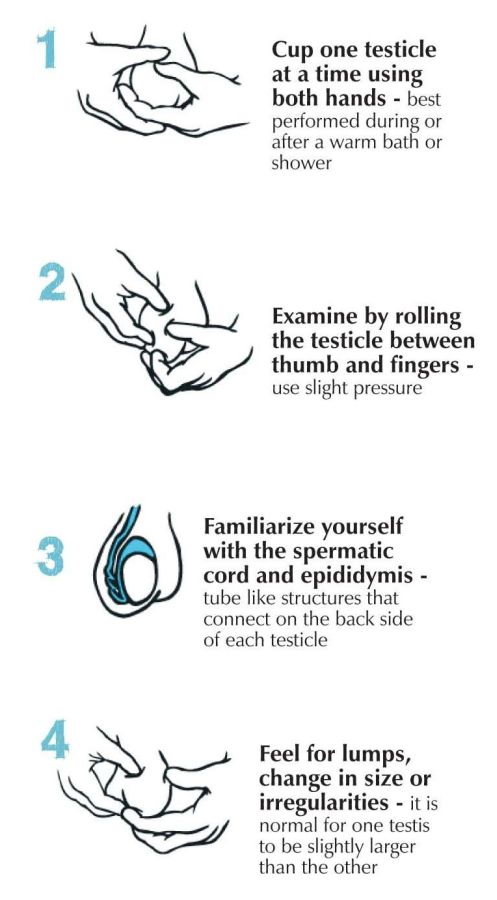 How to do a Testicular Self-Examination… – source self exam graphic: http://www.testicularcancerawarenessfoundation.org/

Testi-monials to Encourage Men to Talk Balls – for their Health

Testi-monials, a campaign created by FCB Cape Town for CANSA which is setting out to remove the awkwardness around talking about testicular cancer, and drive awareness about how important it is that men not only talk balls but take care of them too.

The campaign features testicles giving their own testi-monials about cancer and how they have been personally affected. They will give advice on how to self-examine and help detect signs and symptoms. Read more…

Testi-monials will live on www.testi-monials.co.za where people can ask the campaign’s testi-ambassador their health related questions, including:

The testi-ambassador will give it to you straight, so there’s no need to beat around the bush.

Back to Normal – Award winning ‘Boys’ back in new campaign for CANSA:

Loeries were awarded in the following categories:

Ready to kick male cancers where it hurts? Wozani majita!

We are running cancer outta town at the 10th DAREdevil Run on 13 March 2020.
Get your ticket and join the brotherhood of purple speedos.

We DARE You to take part:

CANSA offered pre-event screening in the build up to the run at the following venues:

Has Cancer Touched Your Life?

Cancer affects one in four South Africans, through diagnosis of family, friends, colleagues or self.

We want you to know that you are not alone and that we would like to support you and your loved ones, regardless of how cancer has touched your life. 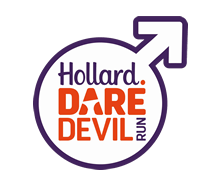