October 2022 – In 2012 the Vodacom Bulls triumphed over a star-studded DHL Stormers team at a close to capacity Loftus Versfeld. The home team shocked South African rugby audiences as they boldly charged out in the first ever bright pink rugby jersey used by a South African team.

In 2016 a packed Loftus again played host to another #GetYourPinkOn clash, this time to a passionate and hungry Toyota Cheetahs side, that also fell short to the pink brigade. On both occasions the Vodacom Bulls dedicated those games and the traction that went with it to CANSA, raising much needed funds and awareness for breast cancer.

On Sunday 30 October 2022, the Vodacom Bulls as part our 10th year anniversary celebrate with Puma, our technical sponsor, will host the third edition of the #GetYourPinkOn campaign and this one promises to be bigger and better than the previous two. With the support and full backing of Vodacom as well as the official broadcaster SuperSport, we will stand united in the fight against breast cancer in supporting two amazing organizations, CANSA and PinkDrive.

The opposition on the day will be the re-invigorated Cell C Sharks team, with a plethora of new signings who by then will be well settled into the Sharks group and looking to destroy anything in their path. Any fixture between these two giants is always a clash to remember, and the thought of a few individual player matchups coupled with the enormity of the event could very well make this the highlight clash on the Vodacom United Champions calendar, other than the semis and finals, of course.

It will be South African rugby’s biggest drive to support breast cancer awareness, with the entire Loftus Versfeld bathed in pink as the fans and players show that “United We Care” for each other. The Vodacom Bulls and the Cell C Sharks will literally carry this message on their backs. What will make this day even more special is that fans will have the opportunity to show their own support by uploading a photo of someone (or themselves) who has suffered from or is currently facing their own battle against breast cancer and it could feature on the back of the limited-edition match-day jerseys of both the Vodacom Bulls and Cell C Sharks for the battle between the four lines. Follow us on our social media pages on how to stand a chance to have your photo on the back of your favorite team.

Rugby aside, what’s the #GetYourPinkOn day all about? From turning Pretoria pink with fun and engaging social campaigns, to hosting breast cancer screening clinics within our communities in the weeks building up to the game, fans can expect the full might of the Vodacom Bulls behind this special cause. 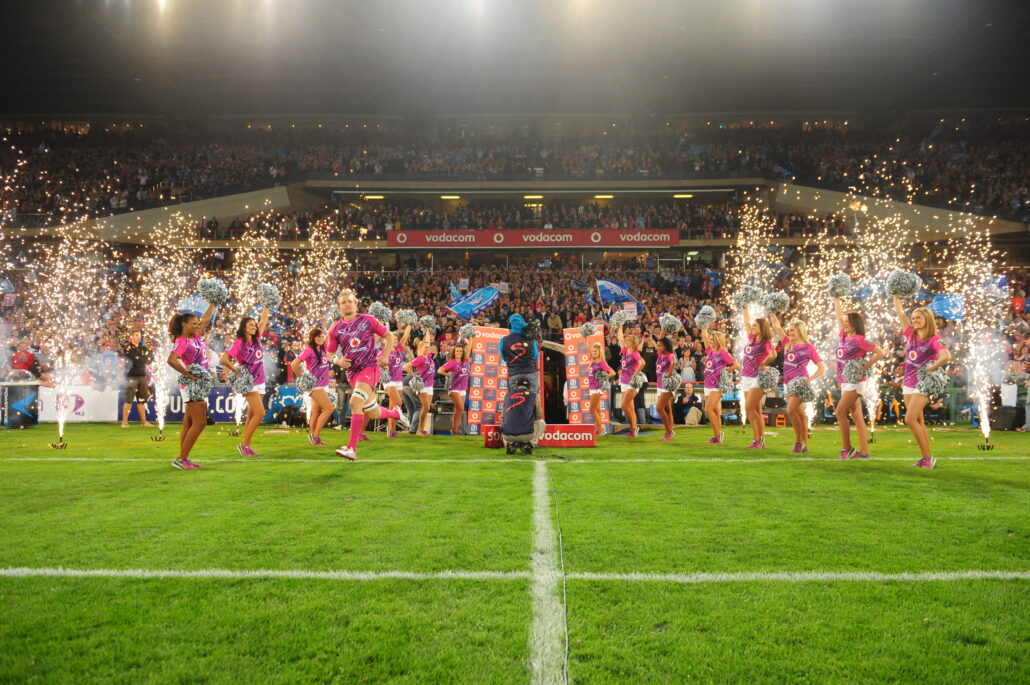 The game kicks off at 15h00 on Sunday, a little different from what the Loftus faithful is used to, but a great time to plan a full day at fortress Loftus. The action will start at 09h00, with the launch of the Loftus Market on the D-field as part of the Castle beer garden. This will include a ton of food and craft stalls, together with live entertainment and our famous kids’ area from the morning all the way through to kick off.

So how much pink can you expect? A lot… well, let’s strive to make everything pink, and when we say everything, we mean everything… our players jerseys, and hopefully your jersey too, pink flags, pink pyro, pink drinks, pink hair, pink faces… and how about pink rugby poles (just need to get Morne, Chris and Goose to buy into that one).

Director of Rugby at the BBCo, Jake White, is just as excited about the campaign as he is about the game, “There’s still a lot of rugby to be played before we face the Cell C Sharks at Loftus, but we all know that the players and fans will be eagerly anticipating this local derby, so the game will no doubt be a key fixture for both teams. I’m not one for too many side shows, but I truly appreciate the idea of being able to support a cause like breast cancer awareness. In saying this, I’d like to urge and invite all our loyal supporters and the public to join us as we strive to make a difference with this pink campaign.”

So, whether you’re a Vodacom Bulls fan, a Cell C Sharks fan, an avid rugby fan or just looking for a good day out – looks like Loftus Versfeld is the place to be on 30 October.

Get your tickets, by visiting our website or go to Ticketpro.co.za and remember to #GetYourPinkOn in the craziest way possible no matter who you support, and you could stand a chance to win some equally crazy prizes.

Vodacom Bulls’ Call on Heard to Unite and #GetYourPinkOn!

As preparations ramp up towards the third edition of the purpose-led pink rugby game, the Vodacom Bulls continue their call for all sport fans to rally behind the cause and be part of the historic day, as they, alongside their Southern rivals, the Cell C Sharks, use the North vs South derby as a platform to help spotlight the fight against breast cancer.

On Sunday 30 October, the battle lines will be drawn, but this time around for a cause more than just the points on the board. The two South African franchises will come together in support of a common cause, draping all of Loftus Versfeld, in pink.

Edgar Rathbone, Blue Bulls Company CEO, says the #BullsHeard has a unique opportunity to use passion and loyalty to fuel support for a worthy cause.

“As the Vodacom Bulls family, we value the work of organisations like CANSA and PinkDrive, bringing critical intervention across our communities. We are calling on all our supporters, Gauteng residents and surrounds, to come and join us as we make this South African rugby’s biggest drive to support breast cancer awareness, showing that “United We Care” for each other.”

Fans still have the incredible opportunity to show their own support by uploading a photo of someone (or themselves) who has suffered from or is fighting breast cancer to www.unitedwecare.co.za, and it could feature on the back of the limited-edition match-day jerseys of both the Vodacom Bulls and Cell C Sharks for their 30 October clash.

“We are honoured as a community in rugby to be able to show our support for breast cancer awareness. The cricket community showed just how powerful a symbol of hope sport can be. Rugby fans are amongst the most passionate supporters in sport, and this is an opportunity for us to also honour the brave men and women who are struggling or have suffered from breast cancer,” said Michelle van Eyden, Head of Sponsorship for Vodacom.

The message of awareness and early detection of breast cancer is a key focus area for both CANSA and PinkDrive.

CEO of CANSA, Elize Joubert says the organisation plays an active role in educating about cancer symptoms, warning signs and ways to lower the risks of cancer.

“We’re excited to partner with the Vodacom Bulls who have a passion for those affected by cancer. The festivities and rugby game are significant ways to celebrate our remarkable milestone as partners for many years as we continue fighting cancer together.”

“With the support of the Vodacom Blue Bulls, we can ensure more cancer screenings with our mobile health clinic and promote early detection which is so important and can lead to better treatment outcomes. We look forward to being part of the day and our outreach activities leading up to the game. Supporting an initiative such as this will also help us to continue with our research, care and support programmes as well as health education towards cancer-free generation one day.”

CANSA’s outreach activity ahead of the game took place at Wonderboom Junction Pretoria on the 24th October 2022 and included the provision of a Mobile Health Clinic and Pop-up Clinic with a bed for screening (Clinical Breast Examinations), blood pressure tests, lifestyle risk assessments, educational talk and exhibition.

Both CANSA and PinkDrive are registered NPOs providing life-saving free screening services to the medically uninsured to test for breast and cervical cancer. Worldwide studies have shown that early detection and diagnosis lead to far more effective treatment of breast cancer and can play a significant role in prolonging life.

With their mobile health clinics, CANSA and PinkDrive are making a significant impact with thousands of screenings conducted nationwide annually, and they are successfully bridging the gap between the traditional health services and the most medically vulnerable.

The support from the sport industry in promoting this awareness is vital to their work.

Fans are encouraged to get involved, by purchasing their tickets from Ticketpro.co.za, for as little as R25.00… 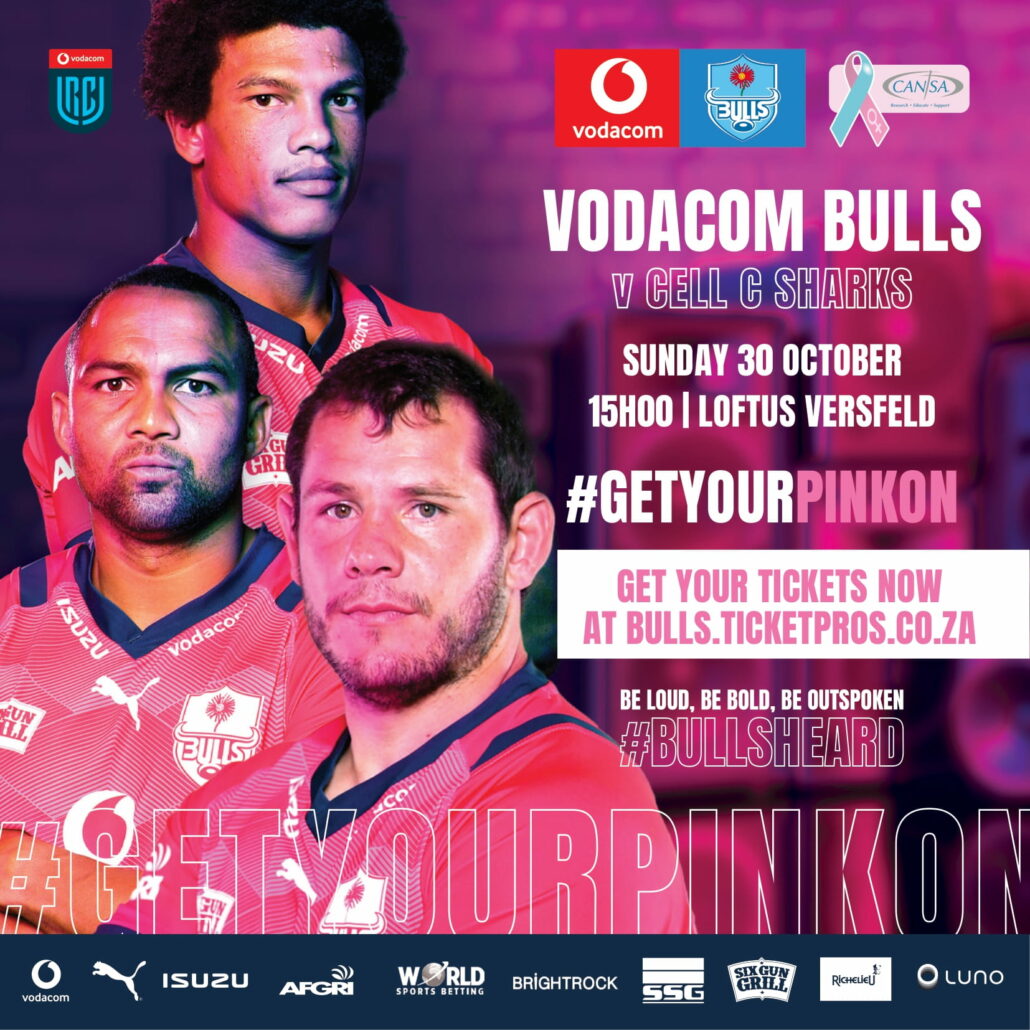 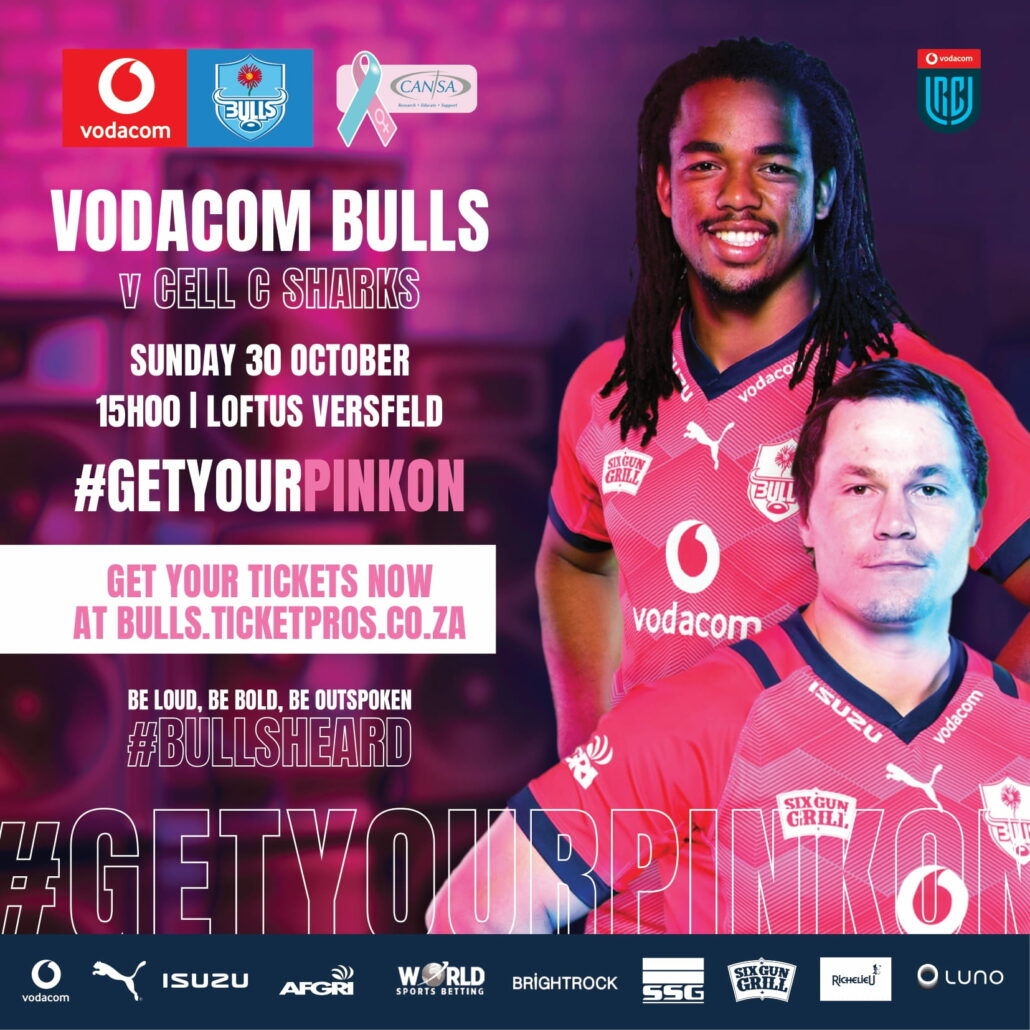 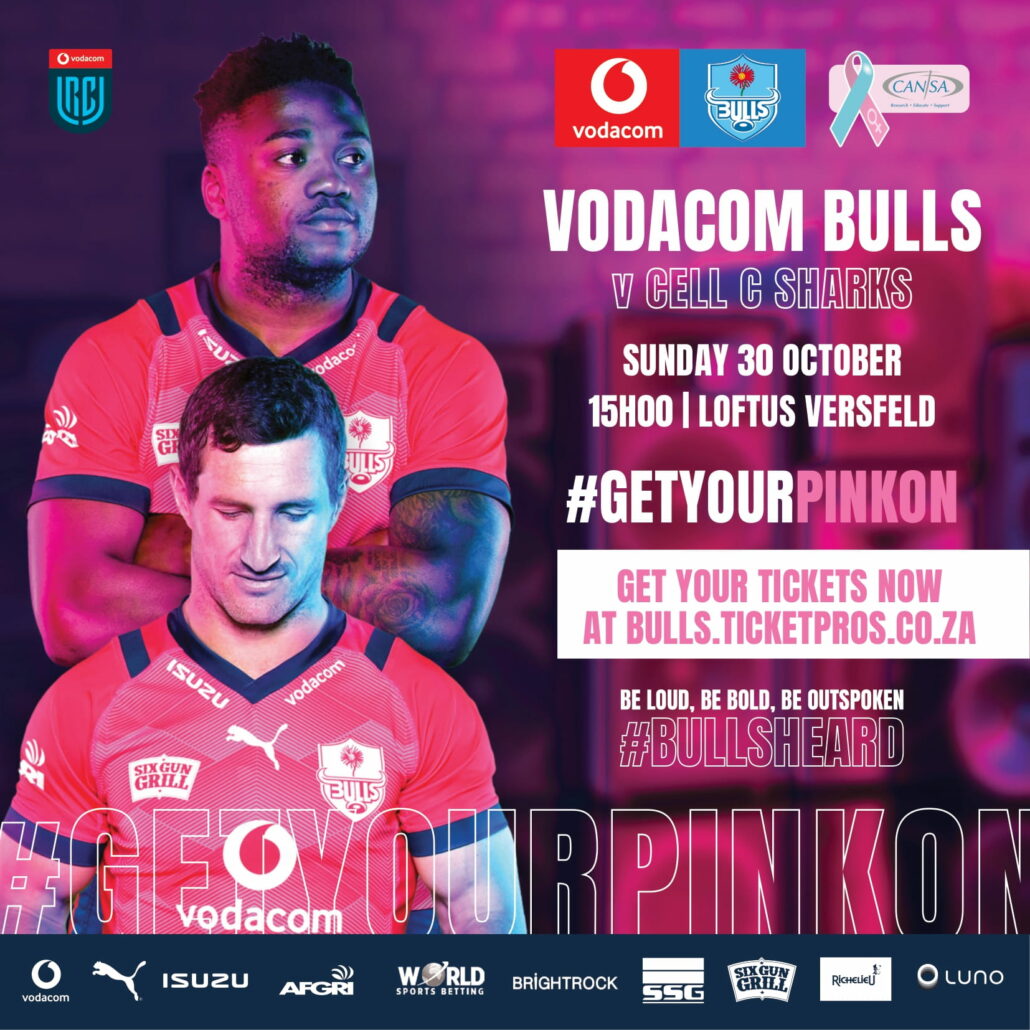 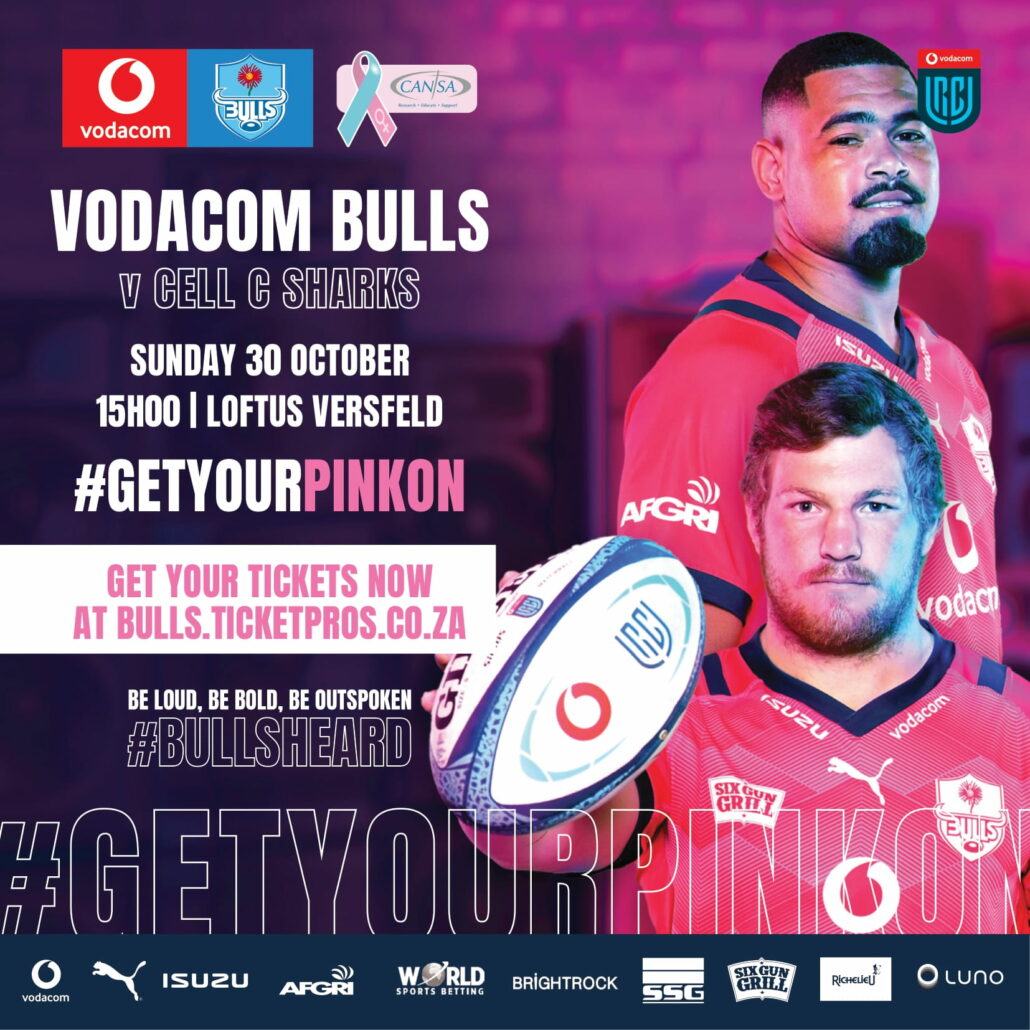 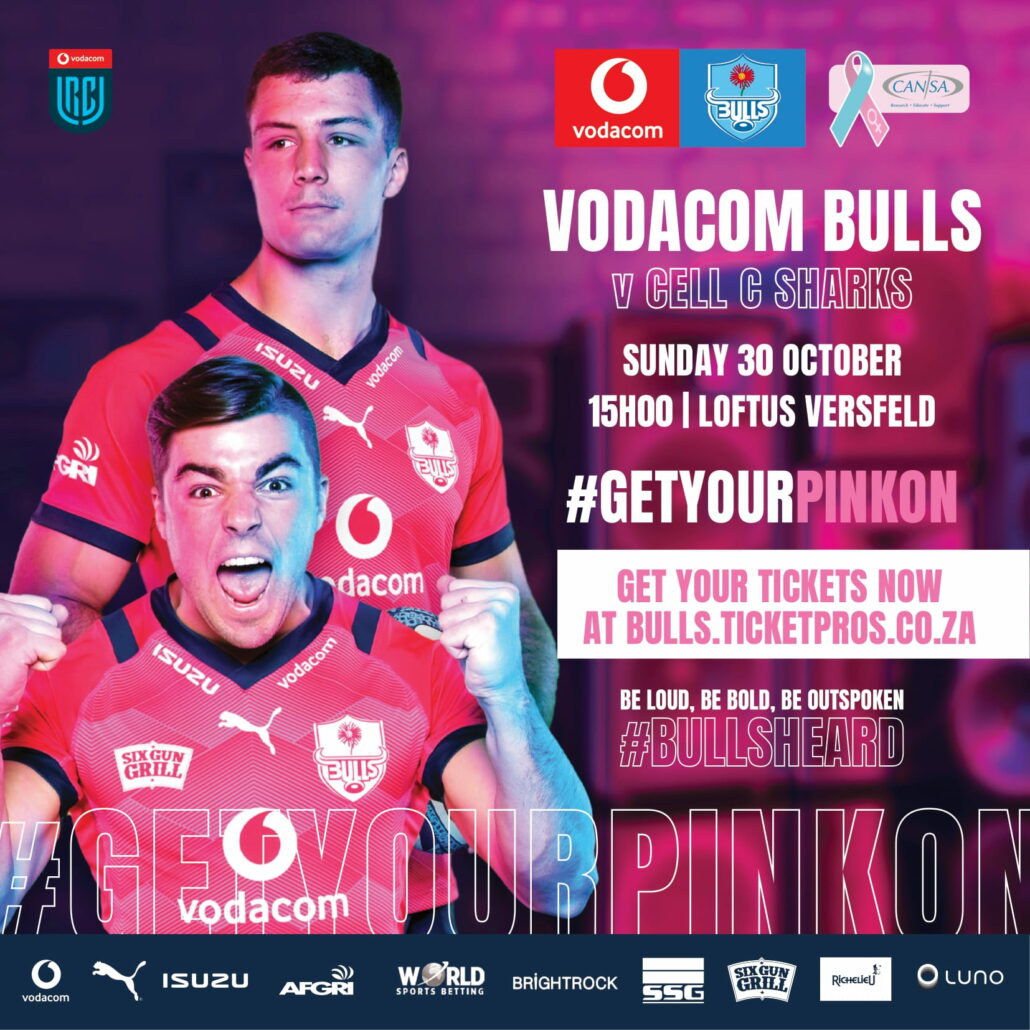