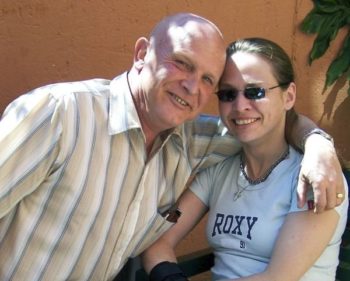 Charmaine Stumke, shares her journey as caregiver to her husband Len:

We got the diagnosis on the 16 December 2011. My darling husband, Len was admitted to ICU, very close to death. A couple of months before, Len insisted he had to see a doctor. I knew something was not right as Len had probably been to the doctor twice in the past 15 years.

On the first visit the doctor told him that it was just the flu and sent him home with antibiotics. Len had not recovered two weeks later so we went back to the diagnosis of bronchitis. Three weeks later we made the same trip again. This time the doctor diagnosed him with COPD but because he knew Len so well he said that he was going to send him for further testing. We went for every blood test under the sun. Our doctor phoned us two days later and told us we must meet him at the hospital.

At this point Len was barely able to breathe or stand without support. He was admitted to ICU where we were told that his kidneys had failed. What? Why? The physician told us he would like to send Len for a kidney biopsy and a bone marrow test. Eventually the final diagnosis was Multiple Myeloma. A couple of years before Len’s mother had died due to a very aggressive lung cancer. His biggest fear had just become reality. We were shattered. I immediately started researching MM. Knowledge is power. I had to get on top of this disease.

He was sent for immediate dialysis. This meant sitting in the dialysis centre for four to five hours, three times a week. I could see this was soul destroying for Len. After a couple of months of hemodialysis, we decided on peritoneal dialysis, where a catheter is inserted into your abdomen and you can do the dialysis at home for eight to ten hours every night. I received training on how to do this and how to take readings and monitor weights, fluid intakes etc., which had to be reported back to the dialysis sister. Suddenly I was the night nurse, on duty every night for the next year and that all while having a real day job.

As spousal caregivers we are never given a choice in this role, we are merely tossed in head first into the very deepest end. First point of focus for us is keeping your loved one’s hopes up and giving them a reason to fight (while your own world is falling apart). We just keep on telling ourselves that this is not about us, it is about our spouse. As long as they are fine, everything will be fine.

You go into a robotic mode. You can deal with your own emotions later. The main priority is to make sure the love of your life is comfortable, that there will be no external stress for them. That everything else is taken care of, medical matters, finances, household matters, family matters and above all your spouse’s emotional, spiritual and physical well-being.

All the doctors’ visits, the chemo, the medications, the set-backs with hospitalisations, all the surgeries become your new normal. It is at these surgeries, sitting in the waiting room, you are eventually alone and that self-pity shows its head, but only for a brief moment. And then the guilt, how can you think about yourself at a moment like this when you should be thinking is your darling going to make it? Is he going to make it through this surgery? Is he ever going to be healthy again? Back to your new normal.

My brave hero lost his fight in 2013 after a long, hard battle. The cancer had eventually spread to his spine, his lungs and then sadly his brain, he was basically bed-ridden for the last two months. In his coherent stages, we laughed, we cried, we reminisced, and then we would laugh and cry again.

After death, what does the caregiver do? Nothing, plain and simple. There is nothing to do. No doctors’ appointments, no hospilisations, no meds, no loved one to make comfortable. No new normal, no robot.

I not only had to mourn the death of my husband, I had to deal with other emotions. First the caregiver guilt, what could I have done differently, did I do everything I could…

I wasn’t eating, sleeping. I was very anxious, I shut the world out. This was my pain and I didn’t want to share it with anybody else because it was all I had. I eventually went to see my doctor who told me that what I was dealing with was quite normal. He added that I was suffering from Post-Traumatic Stress Disorder and prescribed medication for depression and anxiety. He also referred me to a psychologist. I was exhausted physically, mentally, emotionally and spiritually. I was just drained. Empty.

My only advice to other caregivers would be to take time out. You cannot take care of anybody if you don’t take care of yourself as well. Join a support group and go and see a therapist, it helps to speak about all the emotions. Don’t crop them all inside. It is not selfish. Do not try to face this journey alone. Summon up all the support you can from family and friends. Contact CANSA for support for yourself and your loved one.

I could not even imagine where I would be was it not for the support I received from my family, friends and from my CANSA family.

*Charmaine sadly passed away on 28 July 2022 – her colleagues at CANSA will miss her wonderful sense of humour, intelligence and compassion, as will the caregivers on the Facebook Support group she managed ‘CANSA Caring for the Caregivers’

See all Caregiving and Cancer posts