Home Notice Board Our Research Team 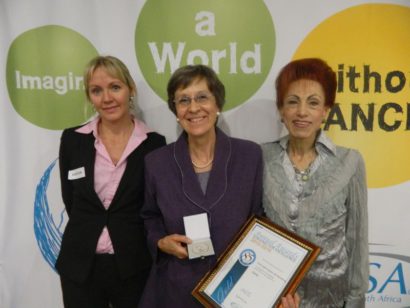 The AG Oettle Memorial award is in remembrance of the late Dr Oettle, a cancer researcher and epidemiologist working in the South African Institute for Medical Research in Johannesburg in the 1960’s, financed by CANSA. Dr Oettlé served the Association with distinction until his death in November 1967 at the age of 47. His research over 16 years strengthened the theory that environment may play a considerable role in causing cancer. In addition, he broke new ground in conducting a survey of cancer rates in the African community. After his premature death, his family and colleagues decided to create the Oettle Memorial awards to be awarded by CANSA to recipients who had significantly contributed to cancer control in South Africa.

Lizette Jansen van Rensburg completed a Bachelor of Science, an Honours and a Masters degree at Rand Afrikaans University, and in 1987, a PhD in Biochemistry at the University of Stellenbosch, and is currently the Associate Professor of Human Genetics in the Department of Genetics at the University of Pretoria.

After completing her PhD, she joined the newly established Department of Human Genetics at UP, where she was tasked with starting up and equipping a molecular research laboratory.  It is in this laboratory where her interest in cancer as both a somatic cell disease as well as an “inherited” disease began.  Her interests were further developed when she was afforded the opportunity of a Research Fellowship with the CRC Human Cancer Genetics Research Group of Prof Bruce Ponder at the University of Cambridge in 1994.  She participated in the “race” to clone the first breast cancer susceptibility gene, BRCA1, and although the group did not win that particular “race”, she was part of the group that first identified a genotype-phenotype correlation with regards to BRCA1 mutations and  breast / ovarian cancer susceptibility.  Certain gene mutations that increase the risk of breast and ovarian cancer can be passed from parents to children, the most common of which are referred to as BRCA1 and BRCA2.

Upon her return to South Africa in 1995, she established a Cancer Genetics Research Group at the University of Pretoria. With the aid of a research grant from the Cancer Research Campaign, she could further investigate linkage disequilibrium and breast cancer genes in the Afrikaner population.  In 1997/98 Lizette received her first CANSA research grant for a study of mismatch repair genes in black patients with colorectal cancer. Since then she has been successful in being awarded a number of grants to study hereditary cancer predisposition.  While much of her research has been on breast / ovarian cancer, the research group has also investigated various other cancer syndromes. The group has also identified unique founder mutations in the breast cancer susceptibility genes, BRCA1 and BRCA2, in South African breast cancer families, which have led to most pathology laboratories in South Africa offering breast cancer susceptibility testing based on these results.  This has allowed for countless families/individuals to be empowered to manage their cancer risks pro-actively.

In 2008 Lizette was invited to join the CIMBA research consortium [Consortium of Investigators of Modifiers of BRCA1/2], a large international consortium focusing on gene-gene interaction with regards to risk modifiers of breast and ovarian cancer. In addition, she is a member of the PALB2 (or Partner and Localizer of BRCA2) Interest Group, a group of around 30 international researchers.  These collaborations have produced some very interesting results with regards to identifying further risk genes for breast and ovarian cancer.  These data may have implications for risk assessment and cancer prevention decision making for carriers of BRCA1 and BRCA2 mutations.   Lizette has commenced with whole exome sequencing, to investigate genetic variation in South African women with breast cancer. Currently she is also investigating the clinical utility of multi-gene targeted next-generation DNA sequencing in clinical practice, specifically with regards to applications for breast surgeons and the wider breast cancer multidisciplinary team.

Associate Professor van Rensburg has established a platform for cancer genomic research in South Africa; she has formed international collaborations which have contributed to moving the field forward, and she has trained numerous postgraduate students in an area of high relevance to the cancer landscape in South Africa.  She is the author/co-author of 56 peer-reviewed publications and has presented 130 papers at national and international conferences.

Says Dr Melissa Wallace, CANSA Head of Research: “On a personal note, it is a great honour and privilege for me to be awarding the Oettle Memorial Award to Associate Professor van Rensburg today. Some years ago in the UK, I worked on a research project examining the psychological impact of inherited breast cancer susceptibility, and saw firsthand the profound impact carrying such a mutation has on families.” Prof van Rensburg’s work has and will continue to contribute to earlier detection and enhanced management of inherited breast cancer in South Africa. CANSA regards this work of the highest calibre and honours Lizette van Rensburg today in recognition of her significant contribution to advancing cancer research and reducing the impact of this disease in South Africa.