31 March 2016 – Members of the Fix the Patent Laws Campaign, including Advocates for Breast Cancer, the Cancer Alliance, the Cancer Association of South Africa (CANSA), Doctors without Borders, People Living with Cancer, SECTION27, the South African Non-Communicable Diseases Alliance, the Treatment Action Campaign, and Wings of Hope picketed outside pharmaceutical company Roche to highlight the excessive price of a life-saving breast cancer medicine.

In the private sector, a 12-month course of Herceptin costs approximately R485,800, or more if higher dosing is required. Roche is able to charge such a high price as it holds multiple patents on the drug, which may block cheaper biosimilars from being sold in South Africa until 2033.

“I was diagnosed with HER2 breast cancer in 2013,” explains Tobeka Daki. “Despite it being recommended by my doctor, my medical aid declined to cover Herceptin claiming that it was too expensive. There’s no way I could afford the half a million-rand price tag. Without access to Herceptin my cancer has spread and last year I was diagnosed with bone cancer of the spine. This medicine is a last hope for patients like me. Chemo alone isn’t enough.”

The Fix the Patent Laws Campaign cannot accept that women in South Africa are dying because they cannot access trastuzumab.

We therefore demand the following:

“Should Roche fail to drop the price of trastuzumab to a level where all women who need it can have access to it, we will ask the Department of Health to grant a compulsory license that will allow for the use of more affordable biosimilar versions of trastuzumab that are shown to be safe and effective,” says Salome Meyer of Advocates for Breast Cancer.

Trastuzumab is just one medicine identified by the Fix the Patent Laws campaign to be priced out of reach of those in need.

“Appealing to Roche is just a step in our advocacy efforts,” says CANSA CEO, Elize Joubert. “We plan to highlight and fight for a number of cancer medicines that will help people live longer. Ultimately fixing South Africa’s patent laws will enable people living with cancer and many other diseases to have access to the medicines they need at affordable prices.”

Why We Need Trastuzumab

Breast cancer is the leading form of cancer affecting women in South Africa. Between 20-30% of breast cancer patients are HER2 positive, which is a particularly aggressive strain of cancer. Treatment consisting of 12 months of trastuzumab, in combination with other therapies, has been shown to be highly effective for treating HER2 positive breast cancer – improving overall survival rates by 37%.

Trastuzumab is recommended as an essential medicine by the World Health Organisation for HER2 positive breast cancer, yet its high cost means the majority of women in South Africa who need it will never access it.

In South Africa, only pharmaceutical company Roche’s branded versions of trastuzumab are available, sold under the brand names Herceptin and Herclon. In the private sector, a 12-month course of Herceptin costs approximately R485,800, or more if higher dosing is required. Unless significantly lower prices are made available to the Department of Health, trastuzumab is unlikely to be purchased on tender and made available for use in the public sector.

At present, public sector access to trastuzumab is extremely limited and requires a case review by a health facility’s Pharmaceutical & Therapeutics Committee, which may — and often will — reject a patient’s motivation for the drug, based on cost. The majority of woman seeking care in the public sector that could benefit from this medicine are never even informed about it.

HER2 positive breast cancer patient Tobeka Daki, from the Eastern Cape, learned that she needed trastuzumab after being diagnosed with HER2-positive breast cancer at a private facility. Says Tobeka, “I’m now using a public hospital and the doctor never ever mentioned Herceptin to me.” She added, “I think if I get this treatment it will give me a chance to see my two sons and my grandson growing”. 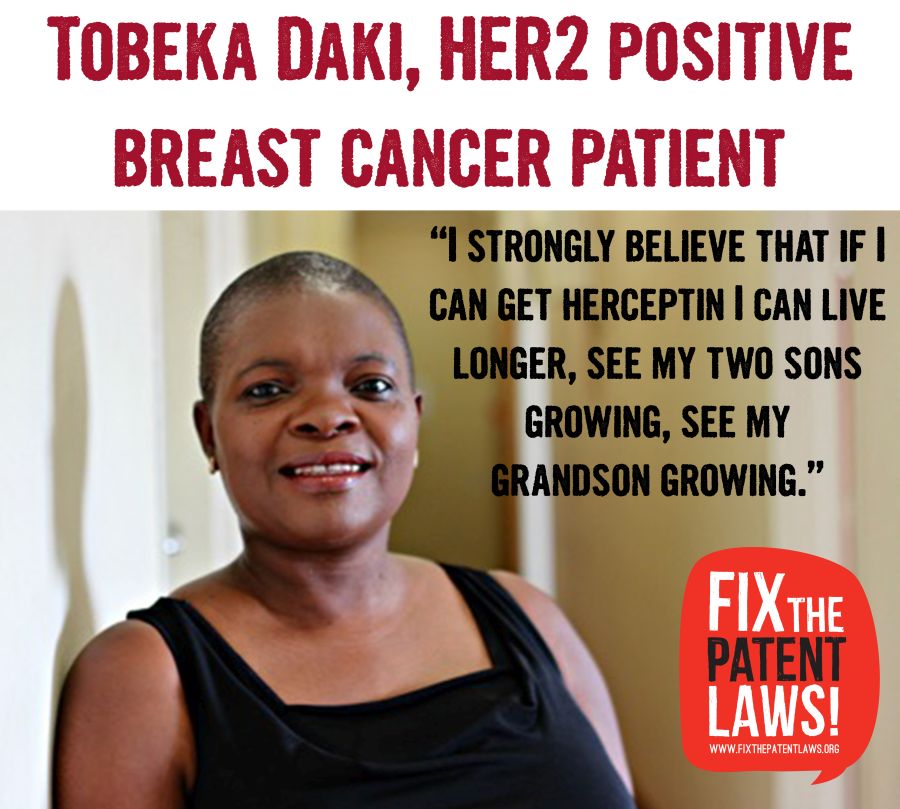 Due to the high cost of Herceptin, many Medical Schemes in South Africa do not pay for trastuzumab in full in the private sector For women that need the medicine, this can create an impossible hurdle.

Veroney Judd-Stevens, a HER2-positive breast cancer patient, explains the impact: “it’s unaffordable, totally unaffordable. Where am I going to get R600,000? I might as well sell my house, get better and then have nowhere to live. That’s what it boils down to.”

During 2013 Roche earned over R100 million from the sale of Herceptin in South Africa’s private sector, and approximately US$6.6 billion in global sales in 2014.

What do Cancer Activists have to Say?

“When [my doctor] told me that my treatment is half a million the first thing that came to mind [is], as a cancer survivor and a supporter, I am with young women and I could see them not being able to access this… There are women who are 40, 30 and they’ve got small children and then they have to lose their lives because they cannot afford Herceptin. It should not be like that.” – Lillian Dube, actress and cancer patient activist.

“If you do not have the money to buy the drug then you don’t have access to it… Irrespective of where you are in the country you have the right to access to treatment and access to the drugs needed. Hopefully we can make that change. It will make a huge difference to all women in South Africa.” – Louise Turner, breast cancer survivor and advocate.

Why We Need Patent Law Reform

For nearly seven years, South Africa’s Department of Trade and Industry has taken piecemeal steps toward reforming the country’s patent laws. More rapid action is required to establish a proper patent examination system that prevents the granting of low-quality patents to pharmaceutical companies, and puts in place legal safeguards that limit the abuse of market dominance by patent-holding companies.

Fixing South Africa’s patent laws will enable women living with HER2 positive breast cancer and other diseases to have access to the medicines they need at affordable prices.