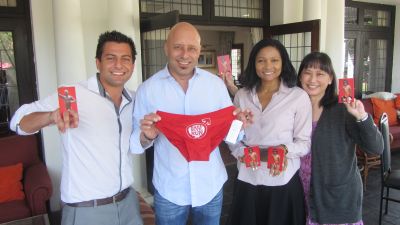 At the age of 18, he had stage 4 testicular cancer, which spread to his lungs and kidneys. Mark remembers the oncologist at the time telling him that the prognosis was “uncertain” and that they would have to wait and see how he responded to chemotherapy.

Mark had nine months of intense chemo sessions lasting up to four hours a session and credits the support and love his family showed him, for pulling him through.

Radio DJ | TV presenter | MC | voice artist – Mark has long been actively working to spread a message of early detection and prevention of cancer to all South Africans in partnership with CANSA Shavathon, and recently Hollard DAREdevil Run.

Mark participated in the 2013 DAREdevil Run and rocked his red speedo to help raise awareness re men’s cancers.