Petition Against Sunbeds – Keeping the Youth Safe from Skin Cancer 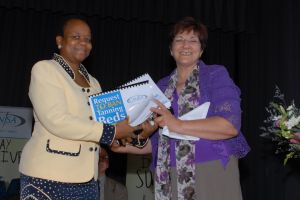 4 February 2013: As part of World Cancer Day on Monday 4, February 2013 CANSA presented to the Deputy Minister of Health, Dr Gwen Ramokgopa, a document of support to ban the use of sunbeds by kids under the age of 18 during a school assembly at the Uitsig High School in Centurion, Pretoria.

Sunbeds & Tanning Booths DO Cause Cancer:

World Cancer Day reminds us that every person, group and government can do their bit to help reduce the burden of cancer. The focus for 2013 is on dispelling common myths around cancer and specifically the common belief that using sunbeds or tanning booths does not cause skin cancer.

Says CANSA CEO, Sue Janse van Rensburg, “We want to raise awareness around the unregulated sunbed industry because of the direct link between sunbed use and the incidence of skin cancer.   It’s only fitting that we hand over the document in the presence of youth – the group which is intended to be protected by the regulations which the Honourable Minister of Health has agreed to issue.”

CANSA staff and volunteers actively collected over 16 000 signatures supporting the requested ban.  Skin cancer in later life is commonly linked to two – three incidences of skin damage caused by severe sunburn in children younger than eighteen years of age. Should this be realised, South Africa would be among the first 20 countries to ban sunbeds to people below the age of 18, such as Australia, France, various states in the US and Brazil which has a total ban.  The International Agency for Research on Cancer, part of the World Health Organization, includes tanning devices on its list of the most dangerous cancer-causing agents – a list that includes plutonium and cigarettes.

As more than 30% of cancers can be prevented, it’s important to make people aware of the risk factors and ways to reduce the cancer risk. Read more…

“Cancer can be prevented by avoiding carcinogens and be treated more effectively if diagnosed early. Be sure to make smart lifestyle choices and go for regular screening,” concluded Janse van Rensburg, who is also a cancer survivor of almost 30 years. Read more about being SunSmart…

Be sure to visit the CANSA website for all the cancer myths and facts this World Cancer Day.