4 February 2020 – World Cancer Day, observed by CANSA and led by the Union for International Cancer Control (UICC), aims to mobilise urgent action from individuals, governments and the global cancer community to close the clear and unacceptable gaps in cancer risk awareness between higher and lower socioeconomic groups.

To mark the 20th anniversary of World Cancer Day, the UICC commissioned a global survey to form an up-to-date picture of the public’s experiences, views and behaviours around cancer. Conducted by Ipsos (independent market research company), the survey includes more than 15,000 adults across 20 countries (including South Africa) in the first multi-country public survey on cancer perceptions in a decade. The results, detailed in UICC’s report released 4 February 2020, International Public Opinion Survey on Cancer 2020: What people feel, think and believe about cancer today, indicates a clear divide between higher and lower socioeconomic groups when it comes to knowledge and awareness of cancer risks and as a result, the practice of behaviours to limit such risk.

The results show that there is generally a high level of cancer awareness among the surveyed population globally. Tobacco use (63%), exposure to harmful UV rays (54%) and exposure to tobacco smoke from others (50%) appear to be the most recognised factors that can increase a person’s risk of cancer. Meanwhile, a lack of exercise (28%), exposure to certain viruses or bacteria (28%), being overweight (29%) and drinking alcohol (35%), appear to be the least recognised cancer risk factors.

Elize Joubert, CANSA CEO says “The fact that lack of exercise and being overweight are not clearly recognised as cancer risk factors is of great concern within the South African context, and we’ll have to redouble our efforts at making sure this information reaches all sectors of the public. Over the past 15 years research indicates high levels of physical inactivity across the lifespan. A recent study found that only 57% of children aged 8-14 years were moderately active while 31% did not meet the recommendation of moderate to vigorous physical activity. Physical activity levels tend to decrease with age, and this has been shown in other studies with adolescents and young adults, as well as older adults in South Africa. Even more concerning is that physical inactivity has been associated with colon and breast cancers. In South Africa there is an alarming increase in the amount of overweight and obese individuals, with more than 29% of men and 56% of women classified as being overweight or obese. Being overweight or obese increases the risk of several cancers, including breast (in women post-menopause), endometrium (the lining of the uterus), oesophagus, pancreas, and kidney, among others.” * 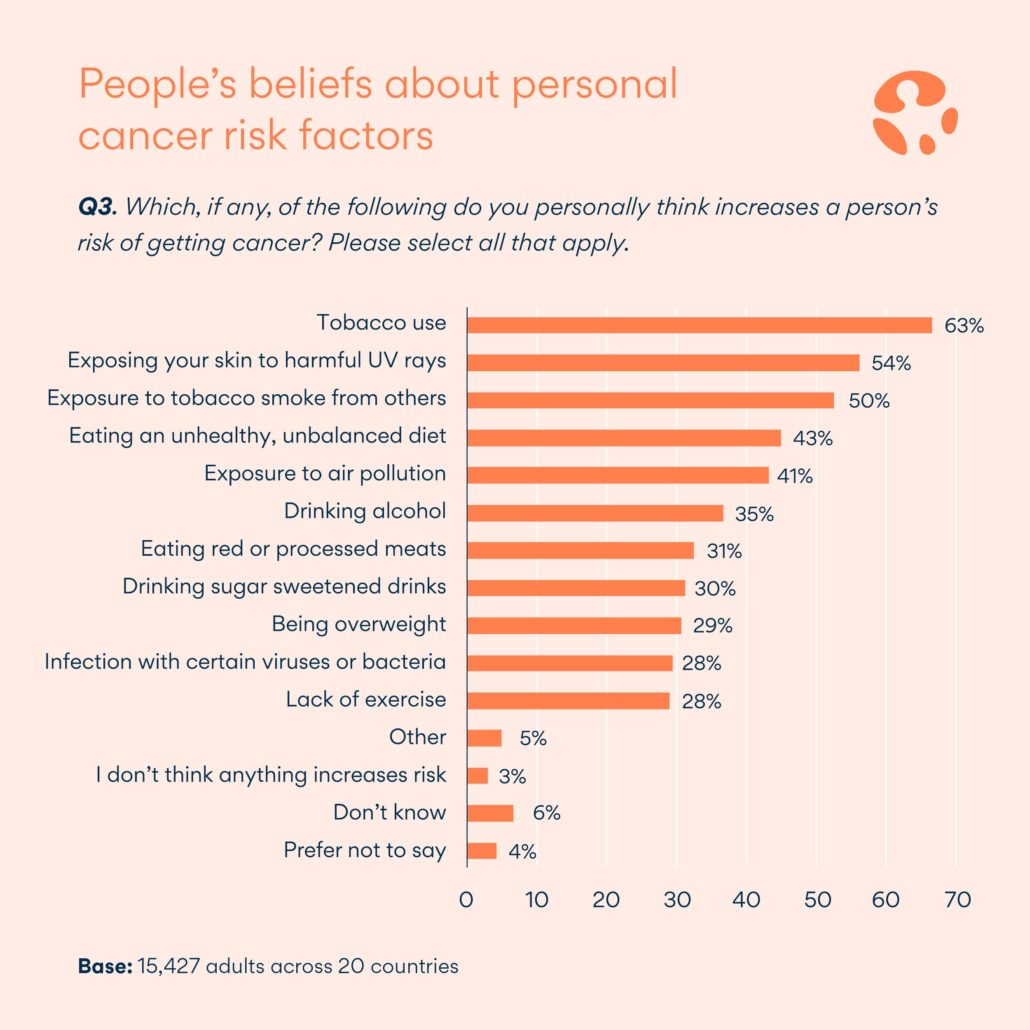 To help raise greater awareness around cancer and to support health-promoting behaviours so that no one gets left behind, CANSA and the UICC are calling for all governments to prioritise cancer awareness-raising through progressive health policies and education to support healthy decisions and health-promoting behaviour, with a focus on engaging lower socioeconomic populations. Further to ensure the public is provided with up-to-date information on cancer risks and how to lower their cancer risk and importantly that the information is presented and delivered in a way that is accessible by individuals from lower socioeconomic backgrounds. 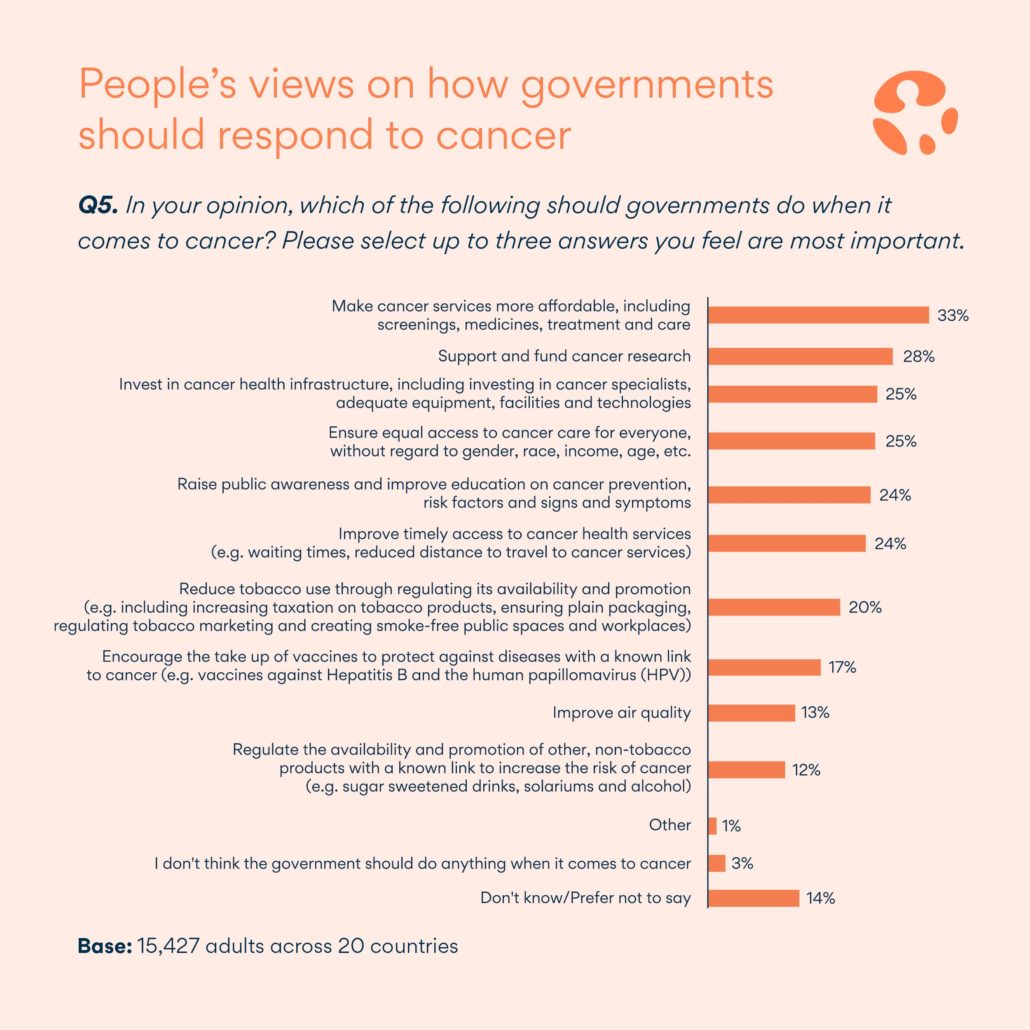 As part of World Cancer Day’s ‘I Am and I Will’ campaign, which calls on each person to make a commitment – big or small – to lowering their cancer risk, CANSA and the UICC recommend that everyone:

Note on the International Public Opinion Survey on Cancer Methodology

The International Public Opinion Survey on Cancer is the international online survey conducted from 25 October to 25 November 2019 on a total sample of 15,427 adults. The survey was conducted via the Ipsos Online Panel system in 20 countries around the world: Australia, Brazil, Bolivia, Canada, China, France, Germany, Great Britain, India, Israel, Japan, Mexico, Kenya, the Philippines Saudi Arabia, South Africa, Spain, Sweden, Turkey, and the USA. More detailed methodology can be found in the report.