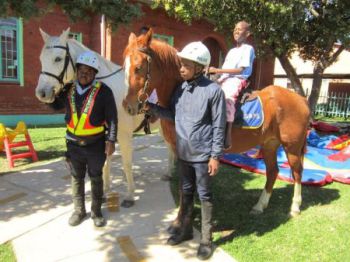 When I found out that my only son, Stuurman (11 yrs old), had brain cancer I thought my eyes and ears must be deceiving me. It was the 19th March, a day I cannot forget.

My name is Sarah Tlou and I am like any other woman who takes care of household matters,  tries to protect her family and carve out a life that lives up to her family’s ideals. But Stuurman’s cancer diagnosis brought me sharply back to reality.

I remember him telling me about the symptoms – he had a headache, swelling and a blocked nose. At first I thought it was just random pains and headaches. I took him to a traditional healer, thinking this would be best for my son, but it was a waste of time.

Eventually, I had no choice but to take him to the nearest hospital, since it caused me great distress to see my son in such pain. I then learned that the staff suspected that Stuurman had cancer. I felt like I was drowning in the deepest ocean. With a deep sense of disbelief, I went to Polokwane to the Pietersburg Provincial Hospital to confirm the diagnosis.

“Your son has cancer,” the words kept repeating themselves in my mind. I wondered how I would manage to get him to treatment and cover transport costs. I worried that he would miss school and I was concerned about the children I would leave behind, when we were away from home. I felt really down and hopeless. Our whole family was facing a terrible thunderstorm.

However, after Stuurman started chemotherapy at Ward L, I began to see a light at the end of the tunnel. Stuurman and I received heart warming support from Dr Wedi and the staff at the ward. They did their utmost to ensure the health of my son and Dr Wedi and the TLC Staff always showed us love and compassion. Most of all the “Man above”, God, indeed performed a miracle in my son’s life.

Today the sun is shining. My son and I smile, because he feels and looks so much better. From the depths of our hearts we thank God and all those who gave us support and love.

To those facing a similar situation, I say, “Never give up praying, never stop taking your child for treatment. For we serve a miraculous God in Whom all things are possible.”

A CANSA TLC Office has been included in the Ward and it can accommodate 30 children and 20 live-in lodger moms. An average of 56 children are admitted on a monthly basis, undergoing surgery, chemo or radiation therapy.

Meals are provided to moms & children and TLC Staff manage contributions from the community to enable provision of clothing & toiletries.

CANSA TLC strives to inform the public and to refer children to the correct specialists for treatment. Paediatric Oncology Specialists have specialised in children’s cancers and they are equipped to make a diagnosis and to recommend a treatment strategy.

An incorrect diagnosis by someone less knowledgeable, can allow the cancer time to build up resistance to treatment. The quicker a child is diagnosed correctly, the better his or her chance of survival.

Read more about the warning signs of Childhood Cancer here…