13 June 2017 (CNN): There are no more public health radiation oncologists left in the entire city of Durban in South Africa.

That’s according to Dr. Melissa Wallace, Head of Research for the Cancer Association of South Africa (CANSA), which holds mobile and screening clinics across the country and often refers patients in need to doctors in the public health sector.

Now, with the number of public health doctors dwindling in Durban and other South African cities, some patients without the means to visit a private doctor may suffer.

“There is a real crisis, because the public health sector is not able to cope with these referrals. Even before the last few doctors left the public sector, patients were waiting up to eight months for treatment. The situation now is going to be even worse,” Wallace said.

“This leaves us with a dilemma: Do we as CANSA continue to screen people if we know they are not going to get the required treatment?” she said, adding that “the unavailability of radiation oncologists means that our existing patients are at risk of having their treatment disrupted.” 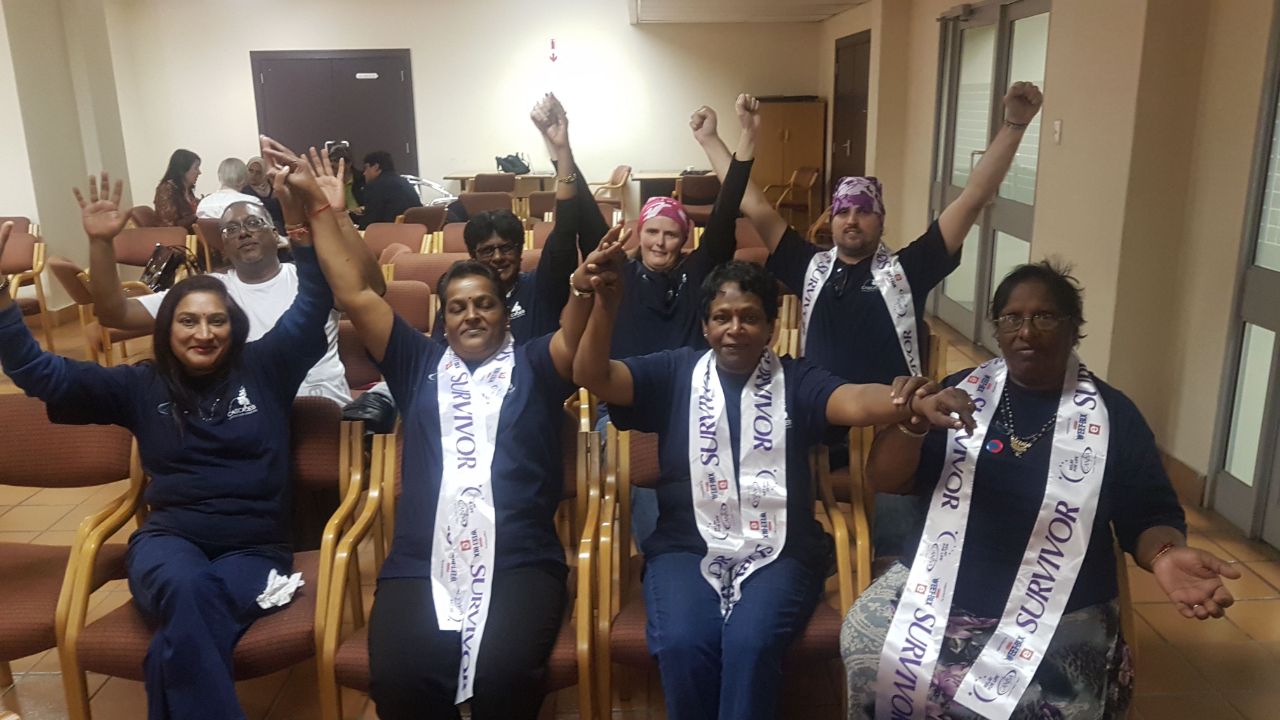 Durban houses the second busiest harbor on the African continent, after Egypt’s Port Said. The city sits in coastal KwaZulu-Natal, the South African province with the second-largest population, about 11 million people.

Samuel Mkhwanazi, a spokesman for the KwaZulu-Natal Department of Health, said in a written statement Tuesday that for now, some private doctors are assisting patients until vacancies are filled.

“The department is implementing an interim plan to provide treatment to cancer patients at its facilities. This is while it is recruiting for replacements. Oncologists and radiotherapists from the private sector will provide oncology services at the public health facilities,” he said. “The department has already advertised posts to fill vacancies.”

Cancer is one of the leading causes of morbidity and mortality worldwide. Nearly one in six deaths globally is due to cancer, according to the World Health Organization.

“There are indications that South Africa will see a 78% increase in cancer incidence by 2030,” Wallace said.

In the past few years, the number of public health radiation oncologists in Durban ranged between five and 10, said Dr. Mzukisi Grootboom, a chairman for the South African Medical Association.

“Two of them resigned earlier this year, and then two more,” he said. “The last one left last week. That’s just in the city of Durban, which services the whole province.”

Many doctors shifted from the public to private sector – even if they never had a desire to work in private – because the working conditions in public health care made effectively treating patients nearly impossible, Grootboom said.
Many of the machines used to diagnose and treat cancer patients were malfunctioning and left in disrepair despite multiple appeals, he said.

Radiotherapy machines have not been repaired in three years, and during that time, patients were dying, but public health doctors did not have the machinery to help them, said Dr. Mvuyisi Mzukwa, a chairman for the KwaZulu-Natal coastal branch of the South African Medical Association.

“They could not fold hands and do nothing,” he said. Additionally, “doctors have left the provincial hospitals because there’s persistent prolonged shortages of staff caused by austerity measures put in place by the provincial government,” Mzukwa said.

“This has led to freezing, abolishing, unfunding of posts, which led to a dire shortage of doctors from 2014,” he said. “These austerity measures by the provincial government have pushed doctors away to the private sector leaving poor patients alone.”

By the time public health officials acknowledged that there was a problem, it was too late, and many doctors had quit their jobs, Grootboom said.

“If this situation continues, my appeal will then go to the rest of the population and say, ‘We can not allow the politicians to run our services to the ground, like we have seen,’ ” Grootboom said. “Not only in this province but in several others.”

Meanwhile, a dismal divide between the public and private health-care sectors trickles down to patients, where the quality of care received depends on whether you are rich or poor.

Across South Africa, “the national public health sector, staffed by some 30% of the doctors in the country, remains the sole provider of health care for more than 40 million people who are uninsured and who constitute approximately 84% of the national population,” according to a paper published in the New England Journal of Medicine in 2014.

The remaining 16% of South Africans have mostly private health insurance coverage, and this group largely includes higher income levels, according to a 2013 report from the WHO.

“Health spending per capita for the insured group is about five times greater than for the poorest 40% of the population, and the poorer population groups are excluded from health services,” the report said. “In this context, even with high levels of total health expenditure, inequity in its distribution is a contributing factor to poor health outcomes, particularly for the low income groups and those without private health insurance.”

This means that challenges and problems with the delivery of cancer care are not limited to the KwaZulu-Natal province, said Wallace, of the Cancer Association of South Africa.

“Across the country, there are shortages of healthcare providers and specialists required to meet the need for adequate cancer control,” she said. “In addition, the health system and infrastructure requires re-engineering to ensure integrated cancer care through screening, detection, treatment, rehabilitation and palliation.”

Jacqueline Howard CNN: There are no more public health oncologists in Durban and only two in KZN. I read that CANSA will be hardest hit by this shortage. Is that true, and how so?

Dr. Melissa Wallace CANSA Research: To clarify, there are no more radiation oncologists in Durban. This does not apply to medical and surgical oncologists. CANSA is not directly involved with the treatment of cancer, so this does not affect us directly. Hardest hit will be patients. However, we do run a number of screening clinics in Pietermaritzburg, Durban, Empangeni and Port Shepstone. We also have a mobile clinic that travels around the province conducting screening (cervical, breast, PSA testing, skin) in more remote, rural areas. When we pick up problems, we then refer people for appropriate follow up and treatment. There is a real crisis because the public health sector is not able to cope with these referrals. Even before the last few doctors left the public sector, patients were waiting up to eight months for treatment. The situation now is going to be even worse. This leaves us with a dilemma – do we as CANSA continue to screen people if we know they are not going to get the required treatment? CANSA also runs a Care Home in Durban which provides accommodation, meals and transport to treatment centres for out-of-town patients for the duration of their (mainly radiation) treatment. The unavailability of radiation oncologists means that our existing patients are at risk of having their treatment disrupted. We have evidence to support the fact that these failures in the system are resulting in poorer prognoses and in some cases, death, for patients awaiting treatment and specialist care.

Jaqueline Howard CNN: Is CANSA working with the KZN Department of Health to find solutions to the shortage, and what might some of those solutions look like?

Dr. Melissa Wallace CANSA Research:  Along with partners, Cancer Alliance and MERAN (Medical Rights Advocacy Network), we are engaging on numerous platforms with national and local Department of Health and KZN Health Portfolio Committee to address these issues and assist in finding solutions to ongoing problems and an increasingly dire situation. An interim solution has been put forward whereby Oncologists and radiotherapists from the private sector will provide oncology services at public health facilities, while the Department of Health is recruiting replacements to treat cancer patients.

Jaqueline Howard CNN: How much of an increase in cancer prevalence has there been in KZN in recent years? As a result, how much of a need is there for public health oncologists?

Dr. Melissa Wallace CANSA Research: Our National Cancer Registry is limited in its capacity to adequately address this question as the most recent statistics released were from 2012. In addition, it is a pathology-based, rather than population-based registry, thus it is likely that cancer incidence is under-reported in South Africa. That said, there are indications that South Africa will see a 78% increase in cancer incidence by 2030 (Stefan et al; 2013) so we know that it is increasing, as it is in other low and middle income countries, along with other non-communicable diseases. Certainly, cancer incidence is rising in South Africa at a rate faster than the healthcare infrastructure can handle.

Jaqueline Howard CNN: What other cancer-related healthcare issues are there in KZN?

Dr. Melissa Wallace CANSA Research: Aside from the dearth of oncologists and specialists required to meet the need in KZN, there has been an ongoing problem with functioning radiotherapy machines. We have evidence from patients to indicate that many have been turned away when attending for treatment because the radiation machines are not working. This too has been a major concern for us. I must however stress that challenges and problems with the delivery of cancer care in South Africa are not limited to KZN. Across the country, there are shortages of healthcare providers and specialists required to meet the need for adequate cancer control. In addition, the health system and infrastructure requires re-engineering to ensure integrated cancer care through screening, detection, treatment, rehabilitation and palliation. We also urgently need a structured, workable National Cancer Control Plan, along with reliable, comparable cancer surveillance data for planning of appropriate cancer services.