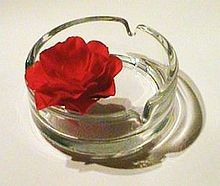 The tobacco companies have long understood the importance of women and girls in the overall market for cigarettes and as a source of new customers. They have conducted extensive market research on the attitudes of women and girls to better understand how to target their products and their advertising.

By focusing their research on how females view themselves, their aspirations and the social pressures they face, the cigarette companies have developed some of the most aggressive and sophisticated marketing campaigns in history for reaching and influencing women and girls.

The consequences of these campaigns are staggering. Smoking among girls and young women increased dramatically in the 1990s. From 1991 to 1999, smoking among high school girls increased from 27 to 34.9 percent. Smoking rates among women over 18 have barely declined over the past 10 years and women are now almost as likely as men to smoke. Though the slogans have changed over time, the tobacco industry’s targeted marketing of women can be traced back to the 1920s. While women were depicted in cigarette ads as non-smoking admirers of smoking men at first, by 1927, advertisements with women smoking began to appear in women’s magazines. One of the most famous early cigarette advertising campaigns directed at women was Lucky Strikes’ “Reach for Lucky Instead of A Sweet.”  Despite the advent of targeted advertising, smoking among women did not really gain social acceptability until World War II. During that era, cigarette companies began to target women more directly, using the fashion, beauty and sophistication themes that still continue today.

The companies also used images of women in the military and the work place. For example, Camel’s ad slogan during World War II was “First in the Service” and highlighted successful women in the military. While these new advertising campaigns focused on women’s growing role in the American workplace, they still portrayed smoking as a stylish and feminine act. This theme of smoking as a way of achieving independence, while at the same time remaining stylish and attractive (especially to men), became less popular after the war ended, but would later reappear.

The Advent of Women-Specific Brands in the 1970’s

Cigarette company advertising continued to target women throughout the 1950s and 1960s, but the companies did not make a full-scale effort to expand the number of their female customers until the late 1960s. Realizing the impact that the women’s liberation movement was having on the role of women in America, the tobacco companies began to create specific brands of cigarettes for women.

With the introduction of Virginia Slims by Philip Morris in 1968, women became a major target of the tobacco industry. Cigarette ads for this brand depicted women as independent and successful with catchy tag lines such as the infamous “You’ve Come A Long Way Baby.” Like early ads targeted at women, these marketing efforts continued to portray female smoking as a way to express one’s independence, as well as a way to be particularly stylish and sexy. 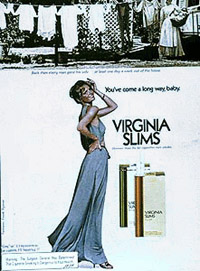 The Virginia Slims advertising theme has not changed much since its introduction. Philip Morris continued to market Virginia Slims using images of empowered women paired with “You’ve Come A Long Way Baby” throughout the 1970s and 1980s. The copy on these ads usually focused on how women’s lives had changed since the 1920s and 1930s, focusing on the new freedoms allowed to women.

In the early 1990s, Philip Morris revamped the image of Virginia Slims with the “It’s a Woman Thing” campaign. While these ad campaigns continued to suggest empowerment and attractiveness from smoking, the ad copy focused on how women are different than men.

More recently, Virginia Slims launched the lavish “Find Your Voice” ad campaign, which featured strikingly beautiful women from around the world and suggested that independence and allure could be found by smoking. (Philip Morris’ chief executive in June 2000 agreed to remove the “Find Your Voice” slogan after being questioned in the landmark Florida smokers trial about whether it might be offensive to smokers with throat cancer.)

With the success of these marketing campaigns, the tobacco companies fully recognized the importance of women and girls as a key to their future success. For example, an internal R.J. Reynolds document stated that “Younger adult female smokers will continue to gain importance among [young adult] smokers due to their stronger incidence trend versus [young adult] male smokers.” Six years after the introduction of Virginia Slims and other brands aimed at the female market, the smoking initiation rate of 12-year-old girls had increased by 110 percent. Increases among teenage girls of other ages were also substantial.

In the 1990s, the tobacco industry started tying their print advertising campaigns to a variety of promotional campaigns. These campaigns reinforced the image of smoking being stylish and sexy by offering free merchandise like clothing and CDs. Studies have shown that there is a direct relationship between the awareness of and involvement with promotional items and smoking initiation by youth.

Realizing that many women were concerned about the long-term health risks of smoking, in the 1970s the tobacco companies began promoting “low tar” or “light” cigarettes to women as a “softer” or even “safer” option. As a 1978 Philip Morris document stated, “Today women make up the majority of low tar smokers. Almost half of all women have switched to low tar.”

Almost a decade later, another Philip Morris document offered a more detailed analysis, stating that “because of women’s nurturing role in society, they are naturally more involved with low tar cigarettes than men (70% of low tar smokers are female). They do not want to stop smoking, yet they are guilt-ridden with concerns for their families if smoking should badly damage their own health. Thus they compromise by smoking low tar cigarettes. … This new product can fit this positioning exactly.”

An example of this marketing strategy can be seen in the True ad campaign from the 1970s. This campaign, which showed golfers and tennis players, as well as young women, read “All the fuss about smoking got me thinking I’d either quit or smoke True. I smoke True. The low tar low nicotine cigarette. Think about it.”

The cigarette companies continued to market these products despite being well aware that the actual or implied health claims in their ads were either misleading or entirely false. In fact, studies have shown that the introduction of “lights” did not improve the public health and may have led to an increase in the incidence of disease caused by smoking. That is because the introduction of lights led many smokers not to quit and smokers of lights compensate by smoking more, inhaling more deeply or blocking ventilation holes.

The cigarette companies continue to target women using the same themes in their advertising. The image of smoking being tied to independence, stylishness, weight control, sophistication and power continues today in the advertisements running in many popular women’s magazines. There are now two main types of cigarettes marketed to women, female brands and dual sex brands. Female brands, like Virginia Slims, Capri and Misty, are marketed directly to women using feminine images. Dual sex brands, like Marlboro and Camel, are marketed to women with independent and fun-loving imagery.

Philip Morris has been especially successful in its efforts to attract women to its “dual sex” brands. For years now, more women, of all age groups, have smoked Marlboro than any other brand. As an RJR document recognized, “It is clear that the primary competitor for a new [young adult] female smoker is Marlboro.”

An undated R.J. Reynolds analysis of younger adult female smokers recognized the importance of this group to industry growth and also the potential in ‘dual sex’ brands like Marlboro and Camel: “Most younger adult females smoke a dual sex brand – not too masculine (e.g. Camel), but not strictly female (Virginia Slims). While specially targeted female brands will undoubtedly play a role in the future market, lifestyle trends suggest that commonalities between younger adult males/females are increasing over time, so that dual sex wants are likely to remain prevalent.”

Female-specific brands continue to play an important role in the cigarette companies’ marketing strategies. Recent female-brand marketing campaigns continue to portray the image that women are empowered by smoking and Virginia Slims continues to be the most popular female specific brand among women.

From the Camel ads of the forties, with images of female pilots and copy lines like “They’ve Got What it Takes!,” to the recent Virginia Slims campaign telling women to “Find Your Voice,” the tobacco companies have continued to target women and girls with their deadly and addictive product. In the United States, smoking rates among males and females in high school are almost equal (34.7 for males and 34.9 for females), and more than 20 percent of adult women are current smokers.