School Principal Claims Victory Over Cancer Each & Every Day 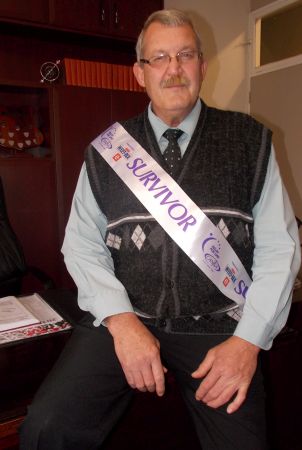 On the day he resumed his duties as the head of Ferrum High, Wynand Swanepoel spent the morning trying to prepare mentally to tackle the stresses of the job while staying focused on his recovery.

He had returned to work after a year of treatment for multiple myeloma, a debilitating cancer of the blood plasma that is causing his bones to dissolve. Wynand stepped up to the podium to deliver his first assembly feeling vulnerable but trying to appear confident and in control.

As he took his position and looked out at the assembly hall, all 980 of Ferrum’s pupils rose to their feet and broke into spontaneous applause. At that moment his careful attempt at self-control crumbled and he wept. After decades dedicated to the teaching profession, his pupils had taught him a valuable lesson… “That even though you may have cancer, your life can still mean something to people.”

As a cancer Survivor of two years, Wynand has decided to host the 2015 CANSA Relay for Life at Ferrum High School (10 to 11 October 2015), where once again the community of Newcastle will band together to CELEBRATE the lives of anyone who has been diagnosed with cancer, REMEMBER all those who have lost the battle to cancer, and FIGHT BACK against a disease that claims more lives than Aids, Malaria and TB combined.

“This is an opportunity for the community and for, us, survivors to help each other and to raise funds for CANSA. They do great work, but at the end of the day, if they don’t have the money, they can do nothing,” explained Wynand.

Wynand’s own cancer story began in September 2013 when he had x-rays done for a sore back that he first attributed to a rugby injury.

“The x-ray was done by Dr van Veijeren, who picked up damage to my vertebra and I was advised to have some tests done in Pretoria, where the doctors discovered cancer,” said Wynand. “It was a shock and I went through the normal process of, ‘Why me?’ I felt anger and sadness, and I had to come to terms with the idea of dying. Finally, I reached a stage when I thought, ‘This is it!’ I shared my feelings with my wife and I spent time praying, but I didn’t pray for a miracle, I prayed for the ability to cope with the cancer and I believe that God sends us angels to help us when we pray… Angels from CANSA, my mother, my wife, the wonderful teachers at the school, the great doctors and everybody else who supported me. They are all angels that stepped in to help.”

Wynand has now adopted a new life philosophy –  says Wynand, “Oorwinning lê nie noodwendig in genesing nie.” (Triumphing over cancer does not necessarily mean being healed). It means living with cancer positively and understanding that you are still in control of your life and responsible for making each day count.”

True to his philosophy, Wynand gives his all at Ferrum each day, but will retire in two years. “The life expectancy for someone with multiple myeloma is six to twelve years and I will spend the time I have left travelling and fishing. I may not be able to cast a rod anymore because of my condition, but I can always get a bait boat.”

About Relay For Life

Why do we Relay at night: The time that Relay takes place is symbolic of what a cancer patient goes through when they hear the words, “You have cancer.” At that time, cancer patients feel as though they are entering into the darkest part of their lives. They may feel sad, angry and apprehensive. We begin Relay for Life entering into the darkness by their side. Midnight represents halfway through a cancer patient’s journey, a time when the side-effects of treatment make them feel as though they would rather give up… But they have no choice but to persevere, so we persevere with them. We end at 6am, when the sun comes up at the birth of a new day symbolizing renewed hope once a patient is in remission.

Why does the colour purple represent the Relay for Life: As the night sky begins to give way to light, the sky is a brilliant shade of purple. Purple represents the transition from darkness to light, and from despair to hope.

Read more about Relay For Life…