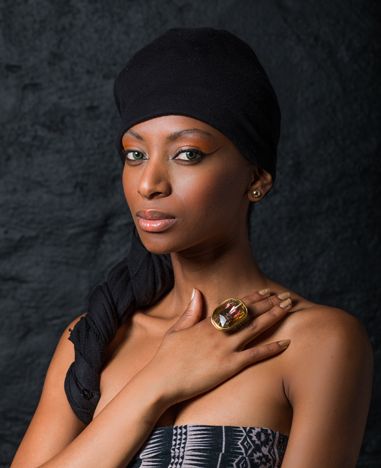 In my ignorance, I believed skin cancer was a white person’s disease. Never had I heard of a black person having such a diagnosis. In my opinion, black people just had sensitive skin and that was that. This is what I believed, growing up.

As a kid in school I played a great deal of sports, from soccer to netball, swimming to athletics and more. My school bag was always full of water bottles, a cap, a bottle of sunblock and of course my boring books. My friends never understood why I carried sunblock. They jokingly said I just wanted to stay light skinned, but it was really because I burnt so quickly; 15 minutes was enough!

My skin and the sun had and still have a love-hate relationship. I made an effort to protect myself, but every so often I would get sunburnt. I wish someone had told me then that if you are sunburnt just a few times you run the risk of getting skin cancer. I would’ve gone for check-ups back then, if I’d known.

Come 2015, two months after my 25th birthday, I was diagnosed with malignant melanoma. My melanoma was found on the lateral side of my left leg and had spread to my groin area. What I thought was a beauty spot or mole, ultimately grew to four times the size and had an irregular shape. The mere sight of it made me uneasy.

Two years earlier, I hit it against the coffee table and the searing pain crippled me for over 20 minutes. The blood on the carpet was outstanding for such a small mole! I screamed, yelled and cried in pain – not caring if I looked like a real cry-baby. That was the first time I ever thought I could use a razor and cut the mole off. Ever heard of bad ideas? Well that was one of my worst bad ideas – after my self-surgery, the mole doubled in size and it looked like a huge fly on my leg!

A regular hospital check-up two years on, turned my life upside-down, with my melanoma diagnosis. My immediate thoughts were death. I was alone in the room with two doctors. I was making jokes, only because I didn’t know what else to do. I was extremely unnerved. What in the world does it mean to have skin cancer? I had just turned 25; did this mean the end of my short life? I thought that was it, I had to write a Will and I would be laid to rest one year after my father’s passing. My mother would be left alone…

To be honest, I can’t recall what my doctors said to me. My mind had checked out. I walked outside and called my partner. As soon as he arrived, I lost it. That 23-year old cry-baby was now 2-years older and still crying – even more hysterically! I curled up in a ball in the backseat of the car and cried my heart out. I couldn’t even drive myself home. So I left my car at the hospital. I had never been so frightened in my life.

It turns out my doctors had said they could operate and remove the cancer. In the beginning I went in religiously for my check-ups; determined to get rid of the cancer. But my rational self, overwhelmed my overly dramatic self, resulted in me avoiding two check-ups.

I was too scared. I woke up, got dressed, hit the highway and halfway there I would turn and go home. I was afraid of the unknown. The doctors clearly said they could help me, but at that point all I could think of was the absolute worst.

I found support and encouragement from the members of CANSA’s Champions of Hope Facebook Group for cancer Survivors & Caregivers, and I set a new appointment for the following Monday. Right there, on the spot, I was to be admitted – it happened so quickly and I was so overwhelmed I left, and returned on Tuesday for admission. On Wednesday I underwent the operation and Friday I discharged myself. I didn’t want to see myself in hospital for one more second!

Once I was brave enough to stare cancer in the face, I took it down. I thank my doctors at the Steve Biko Academic Hospital for acting so promptly. I don’t know where I would be right now if it wasn’t for my support system.

Today I am left with a (in my opinion) horrific scar on my leg and my groin. A friend of mine suggested I call the scar on my leg Ugly Betty. I had demonized my scar and he humanized it and tried to help me see that it should not consume my joy. I am cancer free and here I was worried about Ugly Betty and her sister!

It’s been an extremely trying journey. But I am better for it. Scar or not, I am cancer-free, a warrior and Survivor in my own right. And now that I’ve found out that there is a history of cancer in my family, I have made the efforts to go in and get a full body scan.

Today I am wiser, more responsible for my actions and a cancer Survivor!