Naniki Seboni (29) tells us how she was teased at school for ‘wanting to be like a white girl’ because she used sunscreen and how at the age of 24, she was diagnosed with Stage 3 malignant melanoma.

Ailments as a Child

Naniki sufferred severe nose bleeds as a child. “We never knew what that was all about. My parents just took it as my sinuses as normally it would happen just before I got flu. But then it happened more frequently and had nothing to do with the flu,” Naniki explains.

Eventually, a doctor cauterised the inside of her nose, around the age of five, but Naniki says the reason for the bleeding was never discovered. The occurrence of the bleeding minimised to only when she was outside playing in the sun.

At this time, Naniki also started getting skin rashes every time she was in the sun. “The heat rashes were weekly and I remember having five to six bad sunburns in my life; two to three as a kid. My skin is severely sensitive. Once I fell down a tree and the scar took over a year to heal and go away. My mom finally realised that something was up with my skin and invested in sunscreen and hats for protection.” 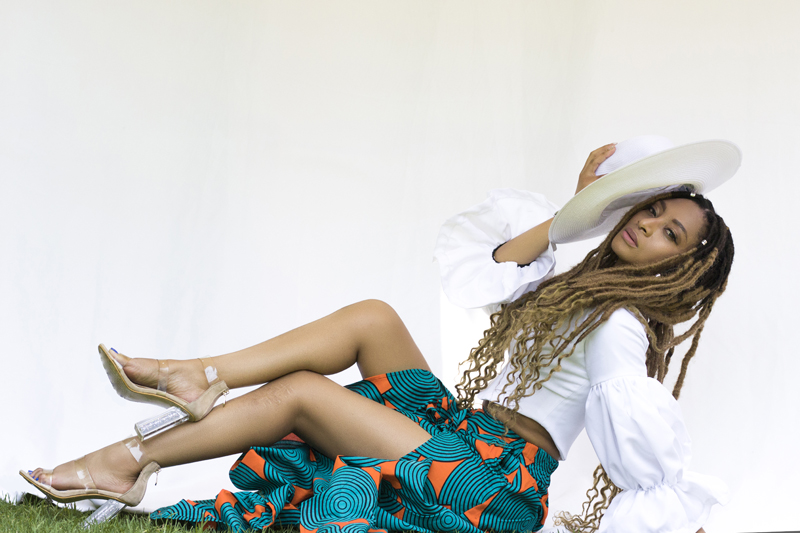 “Around six or seven, I got my first mole on my left hand. It looked like a Jelly Tot. A rough, grey Jelly Tot. It was still round and just kept growing. My mom and my uncle then decided they were going to get rid of it. So, they took thread and tied it around the mole. A few weeks later, the mole fell off at school. I was so embarrassed, picked it up, put it in my pocket and showed my mom when I got home. But a week later, it started growing again. My mom decided to wait for it to grow back to full size again and repeated the thread action. It fell off but this time it never grew back. I still have the scar,” she says.

Due to Naniki being active, she played various sports at high school. This meant she always had a hat on and applied sunscreen before games and practise. “This is where my friends started to tease me saying I wanted to be ‘like a white girl’ because I used sunscreen. Apparently white people were the only people to use sunscreen. Me, also being one of the very few black kids who could swim only added to this joke. Plus, I’m fair-skinned so this was also seen as a bully tactic in Soweto where I grew up. The appreciation of ‘yellow bones’ wasn’t a thing back then,” Naniki jokes.

As a teenager, Naniki suffered three bad sunburns, and red blemishes appeared and disappeared regularly on her body.

When Naniki was in varsity, at the age of 22, a mole developed on her left leg. “This one was different to the other one. It was black, and painful from when it was still small. Then it started growing irregular and looked like a huge fly. It was quite unsightly so I no longer wore shorts. Though, when I put jeans on, it was sore to pull them up over the mole,” the 29-year-old explains.

“I hit it on a coffee table and it bled for about 15 minutes. My lecturer, who was white, noticed the mole and advised I get it checked out, whereas everyone in the black community said, “ke koko”, meaning it’s normal as most black people have them on their necks.”

Naniki finally decided to get the mole seen to in 2015. She was being treated as a neurology patient at Steve Biko Academic Hospital due to anxiety and insomnia from the shock of her father’s death. “Before I got discharged, I asked them to check the mole.” She was sent to dermatology and the mole was removed and a biopsy was done. She waited a month for the results.

When Naniki was told that she had Stage 3 malignant melanoma, she asked, “What is that?” To which the doctors explained skin cancer. Her response was, “But, I’m black?” Naniki goes on to explain, “I had never heard of a black person having skin cancer. Yes, prostate and cervical but not skin cancer.”

“I drew a blank. The doctors were telling me about treatment but I heard nothing. All the people I knew who had cancer died. So, I thought that is what was going to happen to me. I was to follow my father, even though he didn’t pass away from cancer,” says Naniki.

For six months Naniki never went for treatment. “I finally plucked up the courage to tell my mom. I was so nervous as she has diabetes and hypertension and I thought the shock of it would cause a stroke. But, I told her and said I would be going for treatment. But, I would get in my car and drive halfway to Pretoria then I would turn around and come back home. I just couldn’t face it.”

Naniki then got hold of CANSA and joined the closed Facebook Group, CANSA Survivors – Champions of Hope. Here she shared how she wasn’t coping. “I was overwhelmed by the response and the encouragement to go for treatment. So, I finally went to the hospital.”

Naniki was admitted for surgery to ensure a clear margin was removed around where the mole was and to see if the cancer had spread. “I couldn’t understand how a mole on my leg was causing such emotional turmoil in my life,” Naniki recalls.

After surgery, Naniki was told that the cancer had been removed but it had gone deeper than they thought.

It was very close to the bone; she shouldn’t have waited that long to come in as it would have been a less invasive surgery if she came earlier. Several lymph nodes in the groin were removed to ensure it didn’t spread.

“I didn’t have chemo or radiation. And those six months of avoiding treatment was due to me being terrified of chemo and radiation. After surgery, I was told that I was cancer free.”

Today Naniki is an ambassador for Cancervive. “I’m now a cancer Survivor and it’s crazy to think how your life can be aligned with an illness for your purpose to be revealed to you,” says Naniki.

What is her purpose? “When I was 16, I had a dream where God told me I was going to get up, travel and spread a message. And 10 years later, that is what I’m doing, spreading the message of cancer awareness.”

Naniki goes for check-ups annually and carries sunscreen (four bottles at a time) and a correct sun protective hat everywhere she goes. “My monthly bill for sunscreen is R1 000 in summer. I use SPF50 Nivea sunscreen for my body and Bionike for my face; it’s less greasy. I also have a skin journal and take pictures of any mark or blemish that appears on my skin to show my doctors.”

Naniki concludes, “When all the chips were down, I was right down there with them. The support from the warriors and survivors from Champions of Hope was my silver lining when my spirit was shattered by the whispers of work colleagues who said I was pretending to have cancer because I wanted more airtime.

My healing wouldn’t have been possible if it wasn’t for my mother’s prayers but also my ex-partner who despite his own health scare, made me a priority and helped to nurse my physical, emotional and psychological well-being.

And, lastly, not forgetting myself, the will to get up and put a brave face on was nothing short of God’s will. I’m a cancer thriver through and through.”