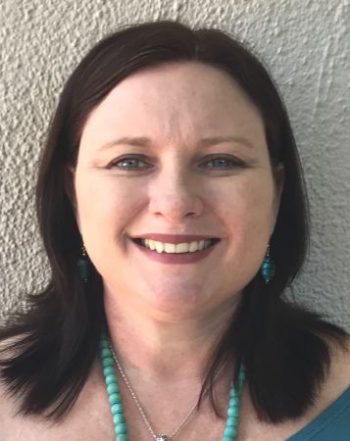 21st July 2016 should have been another banal, winter’s day. It wasn’t. It was the day I was diagnosed with Stage 3b Melanoma and my life irrevocably changed forever.

My name is Katherine Burger and I am 43 years old. I am fair with multiple freckles, but I have never had many moles. I have never been too worried about my skin.

Also, I have always believed and boasted about being really SunSmart – I always smother myself with high SPF sunscreen and boringly sit under a large cabana on beach holidays. I actually hate the sun!

In June this year, I discovered a lump on the inside of my right elbow. It was internal, quite tender and growing rapidly.

My GP initially thought it was an infection in my lymph node and gave me an 8-day course of antibiotics. As I was also taking an anti-inflammatory for the pain and discomfort, I thought the antibiotics had worked, as the lump felt much better. But, it continued to grow, and after three weeks, I was shocked to see that the lump was larger than a golf ball sticking out of my arm!

I marched straight back to the GP, who was pretty alarmed now, and instructed me to go immediately to a surgeon for a biopsy. The surgeon was less perturbed and thought it could be caused from a variety of non – ominous things. She was only a little concerned about Lymphoma, but as I had no other swollen glands, she dismissed this and said she believed it was caused from a weird and wonderful virus. She did want to remove the node, as it was pretty large and very painful at this point.

Four days later I got the shocking results of the biopsy….you could have knocked me over with a feather!

Although we were unsure where my primary melanoma was, it had metastasized to my epitrochlear lymph node and was therefore Stage 3. At this point, we had no idea how far it had spread…

Within a week, I met my oncologist, had multiple blood tests, a full body PET scan, a brain MRI and a liver MRI. Fortunately, it had not metastasized to stage 4, but I did need more surgery to remove the remaining epitrochlear node. The PET revealed a slight uptake in this area on my arm. You can imagine my relief to find out the other node was actually clear of cancer!

After waiting for the shark bite wound on my arm to heal, I started a year of Interferon as adjuvant therapy in mid-September 2016.

Interferon is an immunotherapy protocol. I need to inject myself three times a week for a year – 156 jabs in total! Every injection comes with side effects and every injection makes me ill -headaches, flu like systems, nausea, lethargy, lack of appetite. Immunotherapy is the only regime used for Melanoma – Melanoma is so aggressive, sneaky and evil that it does not respond to chemotherapy and radiation at all! Immunotherapy attempts to programme the T cells in one’s body to fight the cancer. So, the cancer is fought internally and not from an outside source.

Even after completing Interferon I will not be out of the woods – the chances of recurrence are high, as melanoma can travel in the blood and lymph systems to ANYWHERE in the body and it can lie DORMANT for years!

You may have heard about the modern, newer immunotherapies taking the world by storm. 5 years ago, Stage 4 Melanoma had a less than a 10% 5-year survival rate. These breakthrough drugs can remarkably reduce tumour growth and have even cured many cases of advanced Stage 4 melanoma. This may sound truly amazing, but the response rate to these new immunotherapies is actually only around 20- 30% and the side effects can be debilitating and horrendous. They can be worse than most chemo regimes. However, at stage 3, I do not qualify for these newer protocols or any clinical trials in South Africa. Interferon is an old, controversial and toxic treatment but it was all that was on offer to me here. I have to believe it will work!

Knowing Your Body May Save Your Life

Wow! I have I learnt a lot about skin cancer and melanoma since my diagnosis. We are lead to believe that a melanoma is quite an obvious, rapid growing, misshapen, miscoloured, hideous witch-like growth! Not true!

If we have to surmise where my primary was, it was a small lump I had removed a couple of years ago from my wrist. It came back benign, but I had it taken off because it irritated me. It looked like a little, unassuming wart!

Melanomas can look like any lump or bump, so that is why it is so important to know our bodies and watch for changes. You should do a skin self-examination every few weeks. Most importantly, this is why EVERYONE should have an annual skin check by a dermatologist.

Melanoma does not just inflict its wrath on fair skinned people either. Incidences of Melanoma are on the rise for ALL skin types. So, if you are dark skinned, you cannot be smug – Bob Marley died of melanoma. Melanoma is highly treatable and has an excellent prognosis if it is caught EARLY.

One person dies of Melanoma every hour in this world. It has the most rapid statistical growth of any cancer in the world. It afflicts young and old, and 78 000 new cases were diagnosed in the USA alone this year. It is literally seen as an epidemic in Australia, the melanoma capital of the world. We are a close second with our harsh, unforgiving African sun. The sad part is more and more young people are afflicted with melanomas and are dying from this disease – yes, children and teenagers. Having just 5 sunburns in your life doubles your chance of melanoma.

I would rather be pale and alive, wouldn’t you?