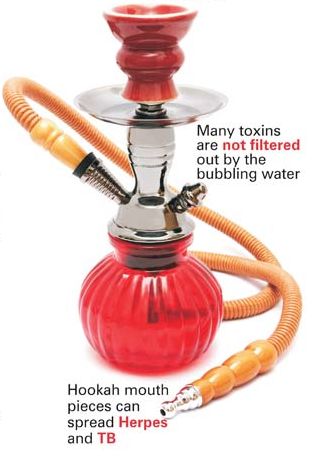 The increasingly popular fad of using a hookah, also known as a hubbly bubbly or shisha, can be deadly now as it a potential spreader of the coronavirus, health experts warn…

Zainab Kader, a PhD candidate in the University of the Western Cape’s Child and Family Studies Unit, explained that hookah pipes set off alarm bells amid the Covid-19 crisis because hookahs were usually smoked in a group and passed on to each member of the group.

Smoking a hookah pipe involved everyone in the group touching it and sharing the mouthpiece. Also, the members of the group sit in close proximity.

“The hookah pipe is a device used to smoke legal and illegal substances and is usually smoked in a group. It is passed from person to person every few seconds or minutes – depending on how long each person smokes and the number of people taking part.

“A smoking session requires the group to sit in close proximity to each other as the pipe is not longer than a metre and the setting up of the mechanism often involves different members of the group touching it, thereby disregarding social distancing.

“Sometimes people use a filter which they place in the hookah pipe hose for hygienic reasons, but it is unlikely that each smoker has their own filter. Smoking the hookah pipe with a group of people and sharing a mouthpiece is not the only danger,” Kader said.

She also warned that during the lockdown the temptation to smoke hookah pipes, drink alcohol and /or smoke dagga might arise. In some cases, alcohol and dagga were used in a hookah.

Either way, the risk of contracting Covid-19 was higher.

A Johannesburg-based study by Professor Angela Mathee, of the Medical Research Council, found that hookah pipes were not restricted in South Africa.

“We believe hookah pipe smoking is not restricted to areas of poverty and that the youth, especially high school and university students across the wealth spectrum, are increasingly taking up this harmful practice. Hookahs are being sold in spaza shops, sweet and other shops in shopping malls.”

The Cancer Association of South Africa’s General Manager, Southern Business Unit, Dorothy du Plooy said: “The most worrying part is that 66% of high school pupils don’t feel confident enough to ask someone not to smoke around them, thus increasing the danger of second-hand smoke.”