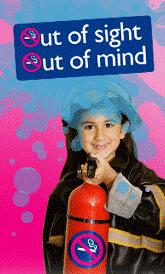 Fact: Half of all long-term smokers will die of cancer or other smoking-related diseases.

Tobacco advertising has been banned on television, in print and on billboards. Yet children are still regularly exposed to branding on packs and attractive tobacco displays in shops. By removing tobacco from public view and introducing plain packaging, we can reduce the pull towards a potentially deadly addiction.

For our ‘Out of Sight, Out of Mind’ campaign, we urged the Westminster Parliament and Scottish Parliament to extinguish tobacco marketing to children.

As ever, our supporters played a pivotal role in this campaign by responding to a Government consultation, writing to their political representatives and generally making a loud noise about the need to protect children.

The changes will start taking effect from 2011 and should be fully implemented in 2013. For the sake of all children and young people, tobacco will finally be put out of sight and out of mind.