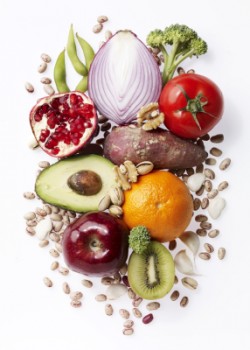 June 19, 2012 — Cigarette smokers who eat more fruits and vegetables are more likely to quit smoking and stay off cigarettes over the long term, new research shows. Investigators from the University of Buffalo in New York found that smokers who ate fruits and vegetables an average of 4 or more times per day were 3 times more likely to be abstinent from all tobacco products, including cigarettes, at 14-month follow-up.

According to lead author Jeffrey P. Haibach, MPH, the study is the first to longitudinally evaluate the relationship between fruit and vegetable consumption and cigarette smoking cessation. The study was published online May 21 in Nicotine and Tobacco Research.

Intrigued, lead author Gary A. Giovino, PhD, began to wonder about the direction of the relationship and added questions on fruit and vegetable intake to the questionnaire of a national cohort study he was conducting on adult smokers. “As I examined the scientific literature, I was surprised by the lack of longitudinal research on the topic, given such an expanse of cross-sectional research findings,” Haibach said. “I became aware of multiple ways in which diet might influence smoking and quitting.”

The researchers randomly surveyed 1000 cigarette smokers aged 25 years and older from around the United States, using random-digit dialing telephone interviews. They then contacted the participants again 14 months later, asking whether they had abstained from smoking and other tobacco use for at least the previous month.

They found that the cigarette smokers who ate fruits and vegetables an average of 4 or more times per day were 3 times more likely to be abstinent from all tobacco products, including cigarettes, 14 months later, compared with those who ate fruits and vegetables fewer than 2 times per day (P < .01). This held true even after controlling for age, sex, race and ethnicity, education, household income, and behavioral indicators of general health orientation.

Those who ate more fruits and vegetables also exhibited fewer measures of dependence. They were less likely to smoke 20 or more cigarettes per day (P < .001), to smoke within 30 minutes of waking (P < .05), or to have a Nicotine Dependence Syndrome Scale (NDSS) score of at least 9 (P < .01) at baseline than those who consumed the least amount of fruits and vegetables.

“People who eat more fruits and vegetables may be more health conscious to begin with and therefore be more amenable to smoking cessation,” Haibach said.
“Multiple surveys indicate that people who smoke cigarettes are more likely to binge drink, use illicit drugs and exercise less, and we controlled for this using exercise, heavy drinking and street drug use as markers of general health orientation,” he added.

However, residual confounding may still exist and the researchers recommend further research, including studies that incorporate all dietary factors and experimental studies.

For now, doctors should continue to ask all of their patients about tobacco use. “For their patients who use tobacco, they should ask about tobacco use at each visit, advise of consequences of tobacco use, assess willingness to quit, assist the patient with a cessation plan, and arrange follow-up, including behavioral and pharmaceutical strategies they feel are appropriate for the patient,” he said. Doctors can also suggest that patients who are experiencing a cigarette craving eat a piece of fruit, a vegetable, or drink a glass of water “to help them avoid giving in to the urge to smoke,” he added.

Scott McIntosh, PhD, associate professor in the Department of Community and Preventive Medicine at the University of Rochester, in New York, said the study was “noteworthy” for finding an important relationship between fruit and vegetable consumption and a smoker’s current level of addiction, as well as their future success with being abstinent from smoking.

“This tells us that future research might not only confirm these relationships but will lead to interventions with smokers to incorporate changes in their diet to increase their chances of being successful with their quit attempts,” Dr. McIntosh told Medscape Medical News. “This study and related future studies can give us improved evidence-based strategies for patient education of proper diet, not only during a quit attempt but as a long-term strategy to successfully remain smoke-free for good,” he said.