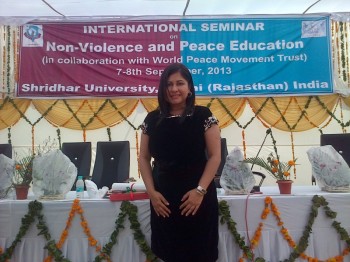 Dr Nirvadha Singh, member of the Governors Committee for CANSA

CANSA is proud to announce that Dr Nirvadha Singh, a member of the Governors Committee for CANSA, has been conferred the title of Ambassador of World Peace (Shantidoot) in Pilani, Rajasthan, India at The International World Peace Conference (7 September 2013).

Many world leaders from political, health and religious organisations were present at the International World Peace Conference. Dr Singh has been awarded the title for introducing peace education into health care and community activities.

Dr Singh is involved in many campaigns including raising awareness against Drug Abuse, HIV, TB, Teenage Pregnancy, Woman and Child Abuse, Violence, Cancer and Disasters and have incorporated the concept of peace within these activities. She is a columnist for the newspaper Satyagraha (Gandhi Development Trust), writing on world and health issues thus raising awareness within the communities.

Both health healthcare issues and peace issues are raised to the communities across South Africa, undertaken through healthcare talk shows on radio stations namely Radio Hindvani and Radio Al-Ansaar. The shows are also heard via audio livestreaming worldwide. Dr Singh has been interviewed by many newspapers and TV Channels including e-News Channel India, the DNA magazine and Times of India with regards to my introduction of Public Health into Peace for the first time ever.

Abstract presented at the International World Peace Conference on 7 September 2013:

Inner-peace is important as a holistic functioning individual as it allows one to think positively to focus clearer on the internal self and external environment. The numerous factors which affect a peaceful environment are namely physical, socio-economic, biological and political which either impact positively or negatively on both the individual and the economy.

The physical factors include disasters either man-made or natural and exhibit a cataclysmic impact upon the environment which disrupts peace completely. It results in the loss of biodiversity, water and sanitation problems, famine and a significant imbalance of the natural ecosystem upon which climate change thrives. War propels a country into a much deeper abyss; the darkness of the division of a nation. The forces of Mother Nature are the most powerful in devastation and depletion of resources which far exceeds the country’s ability to recover.

The demographics of a country are evident by its socio-economic and psycho-social factors which generate divisions within race, religion and ethnic communities. The endemic poverty is evident by the almost 1.3 billion people who currently live on less than a dollar a day. There also exists a strong association between violence, poverty and unemployment with an increase in the incidence of women and child rape and abuse.

Health must be perceived as not only a state of complete physical, mental and social well-being but also a state of spiritual well-being. The body is congruent with the mind and cannot be dissociated if peace is to be attained.

Leadership and politics can serve to unite or divide a nation. A country’s stewardship has the greatest challenge of ensuring the optimal healthcare of its citizens. As the guardian, the stewardship is held accountable and responsible for the good governance, equity and democratic rights of its citizens.

Thus the prelude to Peace is best understood and promoted by virtue of a public health approach with a primary focus on the prevention of the negative impacting variables rather than the solution. Peace is strength and must be nurtured for inner peace and a positive environment to flourish. 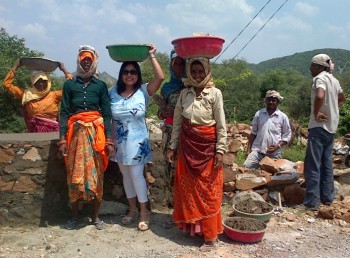