Coping with Breast Cancer in a Foreign Country 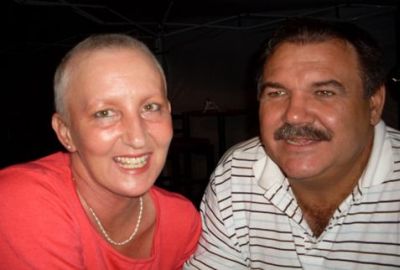 I had not experienced the loss of a loved one and this situation did not allow me to mourn my Mom and then my Dad was gone forever. Little did I know this was the start of life-changing events – all eleven months apart!

At the end of February 2007 my husband Andy, was told on the Friday that he will need to be in Maputo, Mozambique on the Monday, to commence working there. We had been married for 25 years and never lived apart in these circumstances. He left believing he would return three months later.

During August 2007 we came to the conclusion that he was not returning to Richards Bay. So, I had my annual mammogram, packed up our home that we had built, where our girls had grown up, and moved to Maputo. What a shock – this foreign country, foreign language, foreign cultures and basic medical support. This was eleven months after the loss of my parents.

Here I mourned the loss of my parents, our home, my friends and job. I became a non-entity. The loneliness was palpable – even for my husband. I knew nobody.

During October I discovered a lump attached to my nipple. I knew it was cancer. This was not on the mammogram two months prior. I told Andy that night and he held me close and said that I must do what I need to do. He had lost his mother and sister to BC. I had no family history. Because of the frame of mind I was in it took me eight months to return to Richards Bay for my mastectomy. I needed to get my mind in the right place first of all. I knew this was going to be another ‘good-bye’.

After my mastectomy and returning to Maputo I needed chemo and was referred to an Oncologist in Nelspruit. We soon realised that these eight sessions and breast reconstruction was not going to be easy to deal with on our own, without medical support in Maputo and traveling through one of the busiest border posts was a challenge on its own. Let alone the mental, side-effects and physical healing I had to deal with.

Here God counselled me. He revealed that I need to work on the RAPR approach. He was my Counsellor, Friend and Saviour. I lived in prayer constantly. Dealing with the loneliness of staying alone at home all day, while Andy went to work. I need to mention that he was my support in a way that I remind myself that if I ever need to care for him, may I be as he was to me.

The RAPR approach was simple, yet difficult:

R stood for RECOGNISE: Recognise that I have breast cancer and that I am practically on my own without support. My state of mind was the deciding factor throughout this whole process. Apart from the gut wrenching loneliness I had to deal with, the excrutiating pain from the radical mastectomy and no physio guidance in getting mobility in my arm, I had to deal with the onslaught of the chemo side-effects, until I had the next treatment three weeks later. I promised myself I would not allow self-pity, but sadness was always welcome. I cried. I wept. I prayed. I knew that I was not to move onto the next process, until I had fully dealt with RECOGNISE. I was not on Facebook initially, and the cost of international calls to friends and family was expensive. Our oldest daughter was in England and our youngest was studying in Pietermaritzburg.

A stood for ACCEPT (not acknowledge): Accept my circumstances and process them. I had to ACCEPT that I could not just pop out to the doctors for my chemo and then go home. I had to travel four hours and deal with the nausea along the way. Most times I had to do this trip on my own as the Powers that Be would not allow Andy to travel with me.

P stood for PROCESS: Process the pain, nausea, hurt from others, loneliness and fear of the unknown. Process that we had no friends here. Process that – all I wished for was for someone to walk through the door, hold my hand, and say – ‘’I have walked this road, I am here for you’’. During this time Andy and I clung onto each other but mainly, we grew in our faith and trust in God. We had nobody.

R stood for RELEASE: That as I knew I had Recognised, Accepted and Processed each situation and circumstance, I RELEASED it. This was from the hurt and disappointment in our circumstances, to anything that hindered my recovery.

From the onset I realised that too much was happening and that I would forget much or be confused. I took selfie-photos of my mastectomy, chemo, and beautiful reconstruction. I was able to process and see my healing as often as I wished. Little did I know that this would lead to me doing PowerPoint presentations to ladies groups!

Two of the most humbling lessons I learnt was – forgive those who hurt you. Very difficult but needs to be done. And then, love those who felt guilty for not being able to assist you in your time of need. Loved ones cannot always drop everything and nurse you – you need to deal with a lot of things on your own to heal.

Today, eight years later I stand tall, healthy and willing to listen to and assist where I can. We are still in Maputo and often feel as though I am not offering myself to the best of my ability, but, this is where God has placed us and we will move when He says so.

I have dreams and ambitions of working with CANSA and relevant support groups in Nelspruit when we retire there permanently, but in the meantime I will be the friend who listens, even if I have never met you!

How Can CANSA Support You?

Debby Botes is an active member of our CANSA Champions of Hope Facebook Support Group for cancer Survivors (anyone who has heard the words ‘you have cancer’) and loved ones. She is an inspiration to fellow group members.

You need not be alone in your fight against cancer – please join Champions of Hope today!

You are also welcome to contact one of CANSA’s Care Centres for advice and support or to arrange for a clinical breast examination.