Celebrating 85 Years of Working Towards a World Without Cancer

18 July 2016 – No one could have predicted the widespread impact it would have when the then National Cancer Association was established in 1931. Today, the Cancer Association of South Africa (CANSA) plays a leading role in cancer research and cancer control policy development, as well as providing care, support and education to South Africans affected by the dreaded disease.

By the time the National Cancer Association changed its name to the Cancer Association of South Africa (CANSA) in the 1990s, the non-profit organisation was firmly established as the country’s leading player in cancer research, education and support. In addition, CANSA was influencing policy development. It made a significant contribution to the anti-tobacco legislation of 1999 to ban tobacco product advertising and sponsorship activities.

Each decade, since its humble beginnings in the 1930s, CANSA has steadily developed a comprehensive service to the public, making a positive difference to thousands of South Africans affected by cancer.

“I believe our founders would be proud of what we have achieved and continue to strive for,” says Elize Joubert, Chief Executive Officer. “We have not only built on their legacy, we have also expanded their vision to provide care, education and research.”

In the past few years alone, CANSA has been recognised nationally for its significant contribution to South Africa’s fight against cancer. In 2015 and 2014 CANSA came first in the NGO sector of PMR’s Diamond Arrow Overall National Survey on Corporate Social Responsibility Programmes and Initiatives. In 2013 CANSA received a Gold Award for Generosity and Excellence at the Stellenbosch University Vice-chancellor’s Awards.

The CANSA brand was rated the ‘most trusted’ by Reader’s Digest in its Charities category in 2014 and the most highly commended in 2015. It was also voted the ‘most coolest’ brand by youngsters in the 2016 Sunday Times Generation Next Survey.

In November 2015, CANSA’s CEO was announced as the African Continental Winner for Welfare and Civil Society Organisations at the 2015 Africa’s Most Influential Women (MIW) in Business and Government Awards. This followed her winning two awards in July: ‘Country Winner from South Africa’ and ‘SADC South Regional’ for the category ‘Welfare and Civil Society Organisations.’

In addition, CANSA’s integrated report has been recognised several times by the Chartered Secretaries Southern Africa’s Annual Report Awards in the NGO Category, named the 2011 winner in Best Sustainability Reporting; and receiving merit awards in 2012 and 2013. 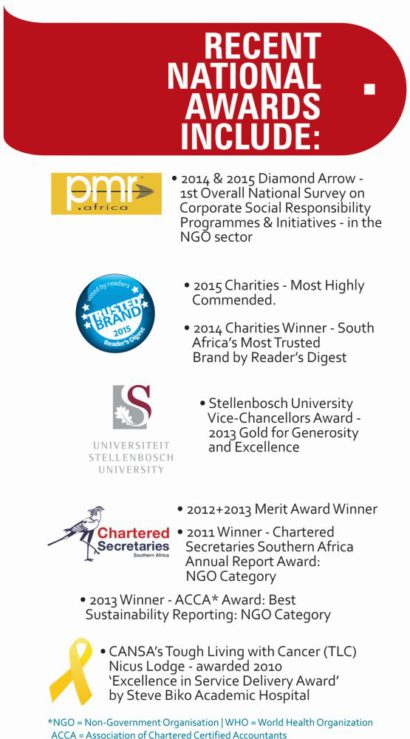 Joubert believes that one of CANSA’s most extraordinary achievements in its 85 years of operation is establishing a community of people, affected by the dread disease in one way or another, who work together to raise funds and get work done.

“These include cancer Survivors, caregivers, medical and research professionals, sponsors and the general public who never cease to surprise us with their generosity and participation in our national and regional events,” says Joubert.

Some of the main events include the CANSA Shavathon, CANSA Relay For Life, Cuppa For CANSA and various sporting events that are supported by extensive marketing and promotion, all aimed at creating awareness and influencing behaviour. “We also need to recognise the work that goes into the myriad community events that take place each month throughout the country,” says Joubert.

CANSA is currently advocating the amendment of the patent law that will result in more affordable medication for cancer patients. It has also presented the Deputy Minister of Health with a document of support with more than 16 000 signatures to ban the use of sunbeds by children under the age of 18.

In the past, CANSA has successfully lobbied for the National Department of Affordable Medicines to provide substantial and quality sunscreen to people with albinism; as well as for cancer to be declared a registrable disease as part of the National Health Act.

CANSA also participates and drives national cancer advocacy initiatives and services as a member of the Cancer Alliance and founder of the South African Non-communicable Diseases Alliance.

CANSA’s History in Brief – Working Towards a World Without Cancer: 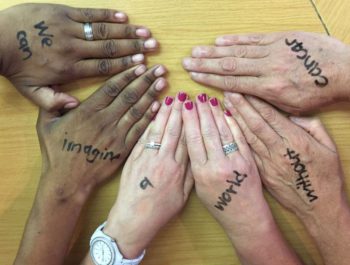 CANSA offers a unique integrated service to the public and to all people affected by cancer. As a leading role-player in cancer research (more than R12 million spent annually), the scientific findings and knowledge gained from our research are used to improve cancer treatment and risk reduction of cancer, realign our health programmes, as well as strengthen our watchdog role to the greater benefit of the public.

Our health programmes comprises health and education campaigns whereby we inform and educate our public how to reduce their risk for cancer, CANSA Care Centres that offer a wide range of care and support services to those patients and family affected by cancer, offer inter alia stoma and other clinical support, medical equipment hire as well as a toll-free line to offer information and support.

We also supply patient care and support in the form of 11 CANSA Care Homes in the main metropolitan areas to accommodate out-of-town cancer patients when they receive their cancer treatment plus one hospitium based in Polokwane, as well as CANSA-TLC lodging for parents and guardians of children undergoing cancer treatment.