CANSA Advocacy – KZN and the Lack of Access to Treatment 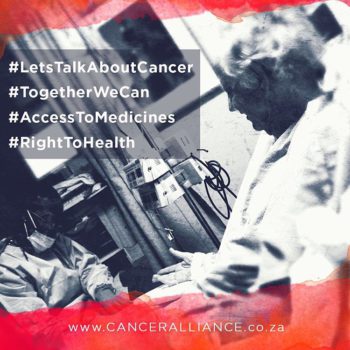 Since 2015 the Cancer Association of South Africa (CANSA) has addressed various concerns with the Minister of Health, Dr Motsoaledi on the lack of radiotherapy services in Kwa Zulu Natal.

CANSA received a number of complaints from the public and professional groups/associations in respect of the non-functioning of radiotherapy machines at Addington Hospital. Reports indicated that the condition of many cancer patients deteriorated and became critical, while in other cases cancer patients died while awaiting access to radiation therapy.

In September 2016 the equipment was repaired but worked for only a few months due to non-payment of service providers for machine maintenance.

In January 2017 CANSA, through the Cancer Alliance called for an urgent meeting with the Minister to address further concerns with regards to the lack of mammography services and the shortage of skilled trained oncologists in the public sector.

The Cancer Alliance has been invited to attend a meeting with the National Health Council on 7th April and a strong case will be presented.

Access to treatment remains of considerable concern to CANSA and we will persist with advocacy on this matter until it is adequately addressed.