World Cancer Day – We Can. I Can. Make a Difference

16 January 2018 – World Cancer Day takes place each year on February 4, providing the platform for the world to unite and raise the profile of cancer in a positive and inspiring way. CANSA is encouraging everyone in all cities and towns around the country to take part and support the 3rd year of the World Cancer Day campaign, and live the slogan of ‘We can. I can.’ View Infographic…

In 2018, the aim is to inspire healthy cities and communities to fight cancer. “We recognise the vital role that schools, libraries, health clinics, service groups, sports clubs and education professionals play in promoting and educating the next generation about their health and well-being. World Cancer Day is an opportunity for teachers, librarians, students, health practitioners and parents to learn more, raise awareness, take action and engage in this critically important health issue. We invite communities across the world on 4 February to support the forward progress in the fight against cancer,” says Elize Joubert, CANSA’s CEO. #WorldCancerDay #WeCanICan 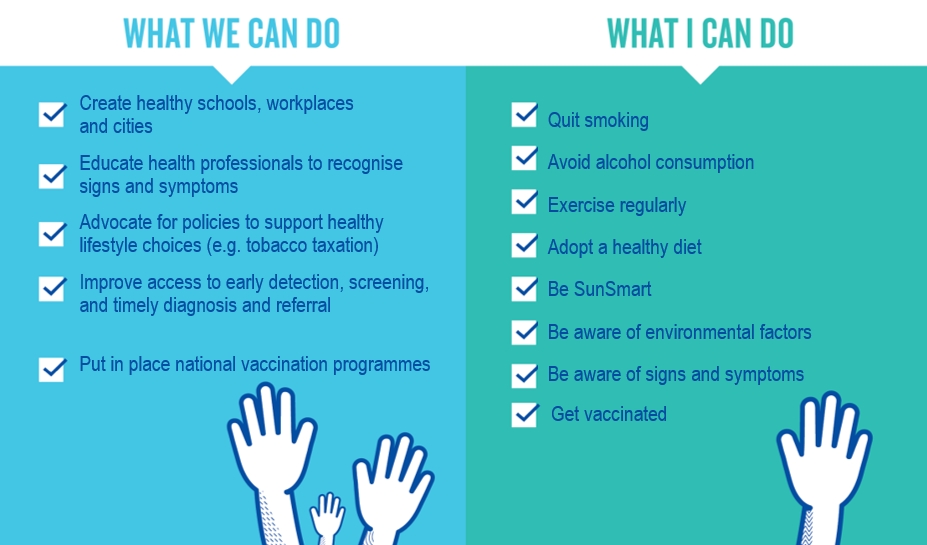 Download World Cancer Day (WCD) Toolkits for inspiration regarding how you can participate:

The global cancer epidemic is currently enormous and is set to continue rising. Approximately 8.2 million people die from the disease worldwide every year, of which 4 million are premature deaths (aged 30 to 69 years). Over the next ten years, it’s projected that cancer deaths will increase to over 14 million per year.

In South, Africa, cancer is under–reported due to the lack of a comprehensive cancer surveillance system.

Team Up with Local Sport Club, Team or Event

CANSA urges everyone to be more active – in every sense – in the fight against cancer by incorporating sport-related and wellness activities into daily routines. Physical activity has been shown to combat cancer, including: risk reduction, helping cancer patients manage the side-effects of treatment such as fatigue, depression and heart damage.

Team up with local sport heroes, clubs and organisations, and create activities or events to bring greater awareness to the cancer cause (walk, bike ride, dance class, or a yoga event). Local sports clubs can promote the Day with in stadium messaging, donate proceeds from ticket sales to CANSA or simply use the power of their networks by spreading the word on social media.

For schools, this could be a fun run or a bike-to school week.

Joubert adds, “Schools throughout South Africa need to champion healthy behaviours for learners, educators and parents. This will not only assist in the battle against cancer, it will also help to lower the cancer risk and manage other non-communicable diseases.”

You can also raise awareness and amplify awareness about fighting cancer with your community and contacts by downloading these WCD Selfie posters. Print the messages that are meaningful to you, and share your selfie and message, using the hashtags #WorldCancerDay #WeCanICan, on your social media platforms.

Light Up the City

Other ways to show support for World Cancer Day is to get cities to light up iconic landmarks to raise awareness. In previous years, international cities signalled their commitment to the global challenge of cancer by lighting up major landmarks in blue including, the Empire State Building in New York City, the Jet d’eau in Geneva, Niagara Falls, the CN Tower in Toronto, Calgary Tower, and the Olympic Cauldron in Vancouver.

“Cities and towns also provide a valuable platform in promoting and protecting public health. It would be fantastic to add iconic landmarks in South Africa to that list and we hope that cities will embrace this visual symbolic idea and light up on 4 February,” stated Joubert. City or provincial representatives can contact the closest CANSA Care Centre to make arrangements.

Progress in controlling cancer can only be achieved by gaining support from all stakeholders including government, business, schools, communities and individuals.

Today, more than ever, a global commitment is needed to advance progress in the fight against cancer and non-communicable diseases. World Cancer Day, co-ordinated by the Union for International Cancer Control (UICC), is the perfect opportunity to spread the word and create a global awareness of the disease in international media and global health and development programmes.

Our Advocacy, Research and Service Delivery team members share their WCD message and encourage you to do the same:

CANSA offers a unique integrated service to the public and to all people affected by cancer. CANSA is a leading role-player in cancer research (more than R12 million spent annually) and the scientific findings and knowledge gained from our research are used to realign our health programmes, as well as strengthen our watchdog role to the greater benefit of the public.

Our health programmes comprise health and education campaigns; CANSA Care Centres that offer a wide range of care and support services to those affected by cancer; stoma and other clinical support and organisational management; medical equipment hire, as well as a toll-free line to offer information and support.

We also supply patient care and support in the form of 11 CANSA Care Homes in the main metropolitan areas for out-of-town cancer patients; a Wellness Centre based in Polokwane; and CANSA-TLC lodging for parents and guardians of children undergoing cancer treatment.