The stigma associated with cancer has been found to play a significant role in negatively impacting the psychosocial wellbeing of cancer patients, cancer risk reduction behaviour and adherence to treatment. While there is research evidence of this internationally, this has not been examined in any detail in South Africa. The experiences of CANSA’s Service Delivery team indicate that cancer stigma is a significant problem in many of the communities in which they work. 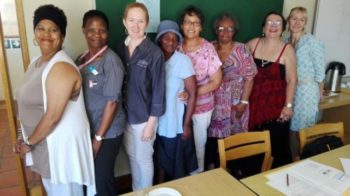 CANSA launched a qualitative study in KwaZulu-Natal and the Western Cape to examine this in more detail. Interviews and focus groups with cancer patients were conducted to explore experiences of stigmatisation, the impact this has had, how people have coped and what their needs are for support and addressing this issue. Focus groups took place with members of the public to explore from an ‘outside’ perspective why cancer is stigmatised. This is being explored in different race and cultural groups where different ‘mental models’ or perceptions of illness and cancer may exist.

CANSA Head of Research presented an e-poster on the study entitled ‘Cancer-related stigma in South Africa: exploring beliefs and experiences among cancer patients and the general public’ at the the bi-annual Union for International Cancer Control (UICC) Congress in Malaysia during the first week of October 2018.

Background: Stigma refers to a distinctive, discrediting characteristic, rendering its bearer tainted or inferior by others. Definitions of stigma acknowledge the recognition of difference; and devaluation. Evidence, largely from high-income countries suggests that cancer is a stigmatized disease. Cancer-related stigma is not well-documented in South Africa, and little is known about how it impacts health-seeking behavior, treatment adherence, quality of life and psychosocial well-being in cancer patients. Limited research has explored perceptions and cultural representations of cancer but an in-depth focus on this is lacking. This context-specific information is essential for relevant, effective intervention.

Methods:This qualitative study was conducted in two provinces of South Africa, KwaZulu Natal and the Western Cape and included participants from a range of cultural and racial groups. Cancer patients over 18 years were recruited through CANSA’s Service Delivery teams to participate in focus groups or one to one in depth interviews. Six focus groups and 40 in depth interviews were conducted with cancer patients. Data collection focused on understanding patient experiences of cancer stigma; cognitive, emotional and behavioral responses to this; and inputs on interventions to address this. Six focus groups were also conducted with noncancer patients recruited from local communities to explore cultural perceptions of cancer and reasons for stigmatization. Audio recordings were transcribed and translated; coded using NVivo 11; and analyzed by the authors using thematic analysis.

Results: Results indicated very poor knowledge of cancer both in patients and nonpatients. Overwhelmingly, findings highlight the perception of cancer as a “death sentence”, influencing patients’ experiences and responses of others in numerous ways. The influence of cultural beliefs was relevant, exacerbating stigma in some cases. The location of the cancer also played a role in determining level of stigmatization. Certain body parts (associated with masculine and feminine roles) as well as more visible cancers/side-effects were more stigmatised.

Conclusion: Results indicate that stigmatization is a significant factor for cancer patients in South Africa, increasing social isolation and negatively impacting quality of life. The implications of the findings for intervention development will be discussed. Education is needed but requires a different focus for different cultural groups.