Opening of the CANSA Science and Resource Centre – 28 January 2010 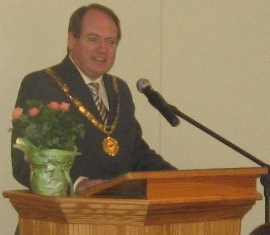 I bring you greetings and wishes of good will from the Executive Mayor, Alderman Dan Plato and from Councillors of the City.

It is an honour to have been invited here today to open this Science and Resource Centre. It is important, even in the modern world of politicized local government, that linkage is retained between the civic structures and the organisations that serve the needs of our people.

I am told that the then Mayoress of Cape Town, Mrs Joanna Stern, unveiled a stone at the original opening of the Cancer Care and Information Centre in 1990 and I am pleased to be a follow-up act 20 years later.

The Centre represents one of those Centres of excellence that one finds in Cape Town, especially in this part of the City, located in and around the area of Groote Schuur Hospital and the University.

Others here can more accurately than me describe the purpose and operation of the Centre. I want to reflect a bit on how such a Centre of Excellence fits into the functioning and growth of this City.

When we consider the development of cities, we have to first examine their current development status. Just as individuals have a hierarchy of needs, as spelt out by Maslow in 1943, so do cities. The value of any intervention or promotion of any sector can succeed or fail based on correctly identifying how it is positioned in such a hierarchy and what it needs to unlock opportunity.

Richard Florida, a US academic who studies the growth and development of cities and city regions, describes five key factors that are at stake which make a city or region attractive in which to live. These are economic and physical security; aesthetics; openness; basic services; and civic leadership.

Broadly, worldwide, the manufacturing sector is in decline and the growing sectors that provide promise for the future are the services sector and the creative sector. The post world-war economy ran on coal and fuel. The fuel of the 21st century economy is knowledge and innovation. The services and creative sectors have different needs and require different approaches if promotion is to succeed.

In the City of Cape Town, we have recognised that both the service sectors and the creative sectors provide us with enormous opportunity for growth.
In the service sector, we have four universities and three teaching hospitals.  We have the basis for growth built on education and health. The tourism industry is already producing many jobs including those in the conference and exhibition industry. Business processing and the call industry are proving to be solid opportunities for further growth.

The City of Cape Town recognises that people are its single most important asset. Therefore, we to have to have strategies for developing, attracting and retaining talent in Cape Town.

The City of Cape Town believes that the availability of globally competitive human resources or talent will be a significant enabler for economic growth. This will lead to further job creation and growth.

Our other real opportunity is in the creative sector, an area where we already have a promising start. We have to now facilitate business incubators and creative eco-systems to build on our solid education base, keep our graduates in town and “grow our own timber” for the vast creative industry of the future. Entrepreneurship has been earmarked as a key area of intervention.

The current Cape Town city government has driven a clear strategy to build on a Maslow type hierarchy. Our first priority was to get the basics right: a platform for economic growth based on three legs of infrastructure provision; effective and clean government institutions; and efficient regulation that enables rather than controls.

We have driven a very strong infrastructure program to advance basic service provision – water, sanitation, cleansing, electricity and housing. We have more recently moved the focus to connectivity – a major public transport program and a 300 km broadband network. Our sights are now also turning more strongly to physical security and law enforcement.

Cape Town is thus close to addressing Richard Florida’s five key factors. Nature has provided us with the aesthetics and our history has provided us with openness. We have strong civic leadership and basic service provision is in hand. As we turn our attention to physical security we will also close the circle on providing the conditions for economic security.

So, to return to the CANSA Science and Resource Centre and its role in our economy. It is exactly part of the Health eco-system of institutions that provides the attraction for further growth in our health service economy. Its unique service proposition adds to the branding of Cape Town as a desired destination for health services. And it provides knowledge and innovation which I previously mentioned as the fuel of the modern world.

And its search for evidence-based truth brands the Centre, and Cape Town, as forward thinking and free from vested interests.

It is my earnest desire that the vision and positioning of this Centre will succeed in the way that its leaders have set their sights to.

My best wishes for your every success and in your service to our citizens.

It is my pleasure to declare the CANSA Science and Resource Centre, open.

Thank you very much.