Biography: Dr Elvira Singh is the Head of the South African National Cancer Registry, a division of the National Health Laboratory Service. She qualified with a medical degree in 2000 and completed her specialisation in Public Health Medicine in 2009 when she was awarded the Henry Gluckman Medal for the best candidate in the College of Public Health Fellowship examination. She represents the NCR on the Ministerial Advisory Committee on Cancer Prevention and Control and has a keen interest in optimising cancer surveillance for South Africa. She has a sound knowledge of the South African health system and her interests include health systems strengthening for cancer care, cancer surveillance and epidemiology.

Biography: Prof David Reynders did his undergraduate training at the University of Pretoria. Upon qualifying he moved to London where he worked mainly in paediatrics and obtained his membership to the Royal College of paediatrics and child health (MRCPCH). In 2001 he returned to Pretoria where he completed his South African paediatric training. In 2007 he spent a year as a clinical fellow in paediatric bone marrow transplant at Bristol Royal Children’s Hospital. He is currently the head of the paediatric oncology unit at Steve Biko academic hospital. He has a keen interest in paediatric bone marrow transplant.

Biography:  Prof Greta Dreyer is a principal specialist and head of the Gynaecologic Oncology Unit at the University of Pretoria and the Steve Biko Academic Hospital in Pretoria, South Africa. She completed her undergraduate studies and training as a gynaecologist in Pretoria and then underwent training and spent time in Gynaecologic Oncology Units in South Africa, the Netherlands, Belgium and Edinburgh. Prof Dreyer has special interests in inherited cancer risk, viral oncogenesis, hormonal effects on cancer and the surgical treatment of women’s cancer. She completed her PhD in the field of cellular cancer genetics and currently has on-going research projects investigating among others HPV infection in various sub-populations, investigating the combination of vaccination with screening and searching for the ideal cervical cancer screening test for Africa. She is the editor of the Southern African Journal of Gynaecologic Oncology.

Is early diagnosis worthwhile and how can we achieve it?

Biography:  Prof DK Stones was Head of the Paediatric Oncology and Haematology unit at the Universitas Hospital in Bloemfontein. He did his undergraduate training at the University of Cape Town. After internship at Livingstone Hospital in Port Elizabeth, he embarked on a career in Paediatrics.  He did a MMed (Paeds) at the University of the Free State and then, after a brief interlude in Port Elizabeth, rejoined the Department in Bloemfontein to be head of the Oncology and Haematology Unit. He had published >40 articles and presented > 100 papers at local and international congresses. Early diagnosis has been a passion of his and part of his duties is to lecture the students on the early warning signs in paediatric Oncology. By adding this to the curriculum he hoped that future doctors will think of childhood cancers and make the diagnosis earlier, thus improving the prognosis for these children.

Challenges in screening for urological cancers in South Africa

Biography: Dr Hilgard Ackermann is a Consultant Urologist and Senior Lecturer at Stellenbosch University and Tygerberg Academic Hospital.  His main interest is Uro-Oncology, with research mainly focused at prostate and bladder cancer.  He is the national principal investigator for the IRONMAN (genetic epidemiology) and PRONOUNCE (Cardiovascular risk with androgen deprivation) prostate cancer trials. He is also the lead clinical consultant for the MADCaP Consortium investigating Prostate Cancer in Men of African Descent in collaboration with Harvard University.

Estrogen and its dual nature? Highlighting the apoptotic- and autophagic action of potential anticancer estradiol analogues

Biography: Prof Annie Joubert is Head of the Department of Physiology at the University of Pretoria and is an established researcher in the field of cancer cell biology. Her research focus entails the a) in silico design of potential anticancer agents, b) the chemical synthesis thereof in liaison with a pharmaceutical company and c) evaluation of these agents for improvement of anticancer treatment. Prof Joubert has received several international- and national scientific awards that include the Albert Beyers Travelling Fellowship, William Dunn School of Pathology from the University of Oxford, UK, the CANSA AG Oettlé Memorial Award and the Research Trust Prestige Muniment. Prof Joubert is actively involved in teaching both undergraduate- and postgraduate students. She has supervised numerous Hons, master’s and PhD students. Prof Joubert has published 92 peer-reviewed articles in accredited international scientific journals. She is an NRF-rated scientist who has gained national- and international recognition in her research field.

Planning for NHI: Setting priorities for cancer prevention and treatment

Biography: Prof Karen Hofman is Research Professor at the Wits School of Public Health and since 2009, Director of PRICELESS SA (Priority Cost Effective Lessons for Systems Strengthening). She leads policy research to evaluate interventions that provide the biggest return on investment for health both within the health system and across other sectors.  Under Karen’s leadership, PRICELESS research has impacted policy and future life expectancy in SA. This includes regulations in 2014 on the salt content of processed food and the 2017 sugary beverage tax legislation. The Min of Health also adopted PRICELESS evidence on Best Buys for Maternal and Child Health for the MDG countdown. Karen has been a member of Ministerial committees on NHI benefits and on Childhood Obesity. A Wits medical graduate, a board-certified paediatrician and clinical geneticist, Karen spent a decade on faculty at Johns Hopkins School of Medicine and subsequently served as Policy Director at the US NIH Fogarty International Center. She has consulted for WHO /PAHO and has more than 100 publications and chapters on global health in peer reviewed journals.  She is a member of the Academy of Science of South Africa (ASSAf).

Biography: Professor Paul Ruff has been Chief Specialist, Professor and Head of the Division of Medical Oncology at the University of Witwatersrand Faculty of Health Sciences and Charlotte Maxeke Johannesburg Academic Hospital since 2002. He has been Principal Investigator of the MRC/WITS Common Epithelial Cancer Research Centre since 2015, and is co-Principal Investigator of NIH Grant 1R01CA192627 with Dr A Neugut of Columbia University School of Medicine, New York, USA. Professor Ruff is a B2 rated scientist by the NRF and has a Scopus H-index score of 30. Professor Ruff has been Chair of the SAHPRA/MCC Clinical Trials Committee since 2015, Chair of the Tertiary/Quaternary Essential Medicines List (EML) Committee and Vice-Chair of the Ministerial Advisory Committee on Cancer Control and Prevention (MACC) and Member of National EML Committee (NEMLC) since 2017. Professor Ruff was appointed to the ASCO International Affairs Committee from 2013-16 and the ASCO International Clinical Trials Workshop Working Group from 2015-2018 and was part of the UICC Review Team of the WHO’s List of Essential Cancer Medicines (2015). Prof Ruff is a Member of SASMO Executive Committee, having been Chair from 2009-2013. Prof Ruff has authored or co-authored over 90 scientific papers, predominantly in the field of colorectal cancer, in various peer-reviewed journals including the New England Journal of Medicine, Journal of Clinical Oncology and Lancet Oncology, as well as presenting over 200 papers and posters at local and international scientific meetings.

Biography: Prof Lize Maree is currently the Head of the Department of Nursing Education, at the University of the Witwatersrand. She joined Wits in 2011 and reintroduced the diploma and course work Master’s degree in oncology and palliative care nursing the following year. She has taught and mentored oncology nursing scholars on all levels ranging from informal up to PhD and hosted International Atomic Energy Agency nurse fellows from other African countries. She assisted with the development of various oncology and palliative care nursing curricula in Africa. She currently serves on the Palliative Care Educational and Training Task Team appointed by the Minister of Health. Lize is a member of various national and international nursing organizations, a fellow of the Academy of Nursing of South Africa and a National Research Foundation rated scientist in the fields of oncology and palliative care. Since joining the academe, she focused on developing oncology nursing as specialist field of nursing. She believes Africa’s nurses should be research active in order to develop cancer nursing education and practice tailored for Africa’s unique needs.

The Skinny on Fat and Cancer Risk

Biography: Megan Pentz-Kluyts owns her own Nutrition Consultancy since 2000, where she consults to clients on various health issues, including heart disease, cancer, diabetes, gastrointestinal diseases, obesity, eating disorders, ADHD, sports nutrition, speaking at schools and performs food demonstrations. She also consults to various clients in the Food Industry both locally and internationally, including assistance with food labelling. Megan is the consulting dietitian for the Cancer Association of South Africa (CANSA). She writes articles for various magazines, publishes in scientific publications, as well as contributes to chapters in books. Megan is a speaker at various events and launches, lectures and is an external examiner and assessor at various academic institutions, is an external examiner for the Cape Peninsula University of Technology (CPUT) and Stellenbosch University Master’s in Nutrition degree and co-study leader for various Masters Projects.

Developments in cancer research at UP

Biography: Prof Stephanie Burton is the Vice-Principal responsible for research, postgraduate education, innovation and international partnerships at the University of Pretoria.  She holds an MSc in Organic Chemistry (1990) and a PhD in Biochemistry (1994) from Rhodes University. Professor Burton has lectured in Biochemistry and Biotechnology at Rhodes University, and then in Chemical Engineering at the University of Cape Town.  In 2009, she was appointed Director of Postgraduate Studies, and leader of the Biocatalysis and Technical Biology Group, at Cape Peninsula University of Technology. Professor Burton took up the position of the Vice-Principal : Research and Postgraduate Education at the University of Pretoria in 2011. Her research interests are in the field of applied biochemistry and biotechnology, and her field of specialization is biocatalysis – the production of valuable compounds such as antioxidants using biological reaction systems.  She is an NRF B-rated researcher, and has published extensively in international peer-reviewed journals and books, and holds several patents. She is a Fellow of the Royal Society of South Africa and a member of the Council of Academy of Science of South Africa. 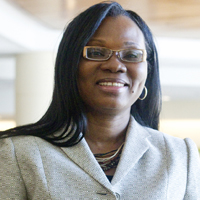 Biography: Prof. Folakemi Odedina is Professor at University of Florida, PI of the US NCI-funded Florida MiCaRT Center, and PI of the NCI-EGRP supported Prostate Cancer Transatlantic Consortium. Funded by NIH and Department of Defense, her research program focuses on addressing prostate cancer in Black men globally. She has directed over 30 research projects globally. Her contribution to Health Equity dates back to 1994 and has resulted in multiple recognitions. She is currently a Carnegie fellow at University of Cape Town.