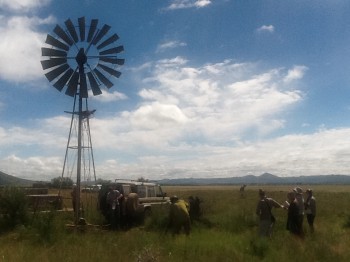 The first baseline water samples being taken from a borehole-wind-pump 14 km north of Cradock.

Fracking involves releasing gas from shale kilometers below the surface.  To do this, water containing potential hazardous substances is used under high pressure.

What is the connection?  CANSA aims to help protect Karoo drinking water from pollution with carcinogens which are unfortunately involved in the fracking process – analysing baseline water so that if pollution does occur before and after, data could be used as evidence in court and be a deterrent against pollution. 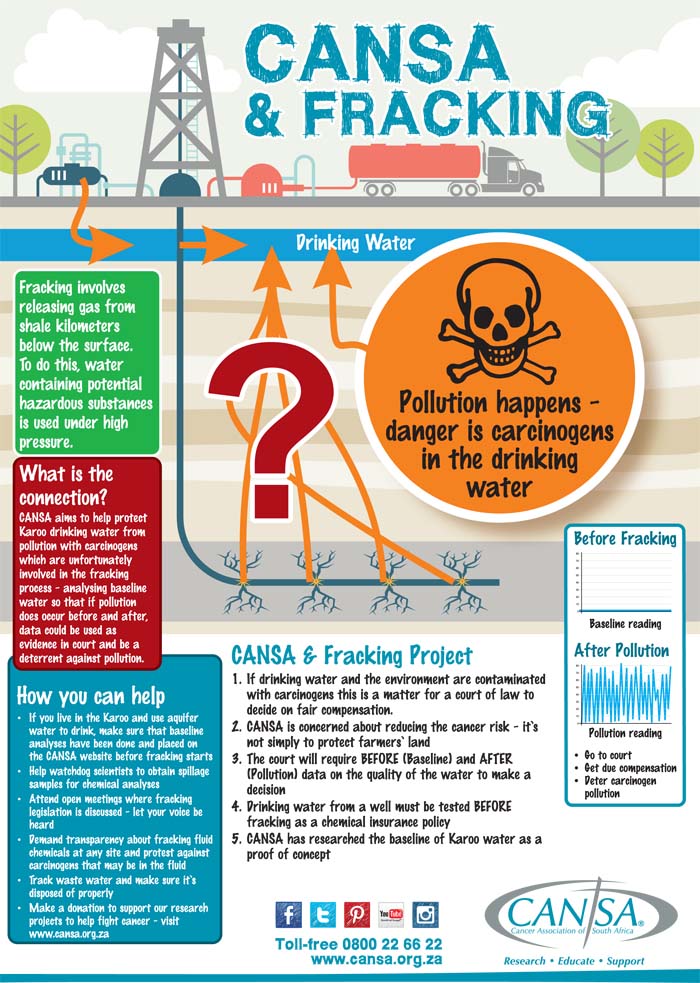 How you can help

The first baseline water samples being taken from a borehole-wind-pump 14 km north of Cradock.

Meeting at Groot Schuur to discuss wording of Memorandum of Agreement

LCMS instrument at US

The basic idea that CANSA has developed in conjunction with Jonathan Deal, CEO of the Treasure the Karoo Action Group (TKAG), is that a “Proof-of-concept” experiment should be done whereby underground drinking water is professionally removed from a GPS-defined well situated in an area where fracking companies have shown great interest recently; that this water is maximally analysed in various laboratories at Stellenbosch University Central Analytical Facility and that the baseline data is posted on the CANSA website. It is believed that such activity can have the following beneficial effects:

1. Open access publication of the baseline water data. It demonstrates that CANSA favours transparency.
2. The example of CANSA and TKAG could set a trend worldwide especially in countries where fracking is happening – or likely to happen.
3. Publication of the baseline data forces the fracking companies to be extra careful.
4. In some cases publication of baseline data could act as a deterrent against fracking on the particular farm where the underground water was analysed.
5. Ultimately the project is aimed at substantially reducing the cancer risk in drinking water associated with farms in the fracking areas of South Africa.

CANSA’s Involvement Up to Date

On the 3rd of March 2014, the first baseline water samples were taken from a borehole-wind-pump 14 km north of Cradock. This historic occasion was attended by CANSA’s Outgoing Head of Research, Dr Carl Albrecht, Jonathan Deal, the farmer and two journalists. All of the parties involved (except a representative of US) also signed a MOA. Six litres of Karoo water are now stored at minus 20 degrees centigrade in a dedicated deepfreeze. This water has being subjected to a battery of tests at the University of Stellenbosch.

South Africa has a chronic shortage of water and cannot tolerate pollution of water, especially not with carcinogens and/or Endocrine Disrupting Chemicals (EDCs). This project is a unique approach to preventing carcinogenic pollution of South African water resources.