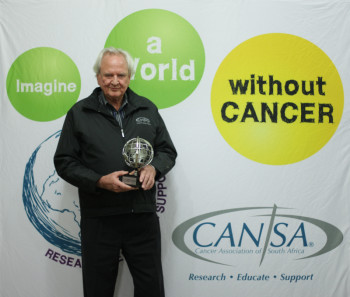 Dr Carl Albrecht, CANSA’s outgoing Head of Research was honoured at the recent CANSA Research in Action Conference for his meaningful cancer contribution throughout his career and particular, during his over 30 years involvement with CANSA.

Carl Albrecht embarked on a quest to help eradicate cancer 45 years ago when he did a PhD at WITS on the mechanism of carcinogenesis using a man-made chemical known as Butteryellow. This work was taken further in the Molecular Anatomy Laboratories in Oak Ridge, Tennessee, and then in the National Chemistry Laboratory of the CSIR in Pretoria. In 1976 he was invited to join the Department of Pharmacology at Stellenbosch Medical School and proceeded to study dormancy of melanoma cells as well as testing the indigenous medicinal plant, Hypoxis sp., for anti-cancer properties in human lung cancer patients.

This was the first registered clinical trial using an indigenous plant extract in the history of South Africa. He was also a senior lecturer and taught chemotherapy to about 2000 medical students in their third year over a period of 21 years. He wrote a textbook on chemotherapy, published 45 peer-reviewed articles and was a co-inventor of three US patents.

In 2007 he became a free-lance medical research consultant, mainly for CANSA and was appointed fulltime by CANSA as the Head of Research in 2007. He has also served as a member of the CANSA Research Committee (RESCOM) since 1982 and was Chairman of the Western Cape Regional Council of CANSA from 1992 – 1996.

We thank Carl for his commitment and support during his time with CANSA, he played a major role in in helping CANSA become a most trusted brand, respected partner and recognised leader within the cancer arena.