Home CANSA on the Move for the Youth Research Projects SunSmart

More than a third of learners who participated in a CSIR study – results released in September 2013 – reported that they never use sunscreen when they are out in the sun.

This was one findings of The SunSmart Schools Research Project, which was co-funded by CANSA, the South African Medical Research Council and the CSIR. In one outcome of the research, CSIR environmental health researchers have drafted a sun protection policy for schools. The study was conducted at 24 schools across the country’s nine provinces. Only nine schools indicated that they have sufficient seating in the shade for all learners during breaks. Read more about the findings of the CSIR Study here…

Dr Caradee Wright, CSIR principal researcher who led the study, says that children either do not know how to protect themselves against getting sunburnt, do not place sufficient value on their health to alter their behaviour, or are not supported at school to do so.

The poster featured here arose from work that Dr Wright did later in 2013 as an extension of the original survey study. She carried out focus group discussions among Grade 7 and Grade 8 learners in Gauteng and KwaZulu-Natal and asked them several questions about how they experience the sun.

How Do Kids Perceive SunSmart Behaviour?

During these conversations with Grade 7 and 8 learners, she learnt that most learners have heard what being SunSmart means and they do seem to know why one should be safe in the sun, especially in terms of skin cancer prevention. 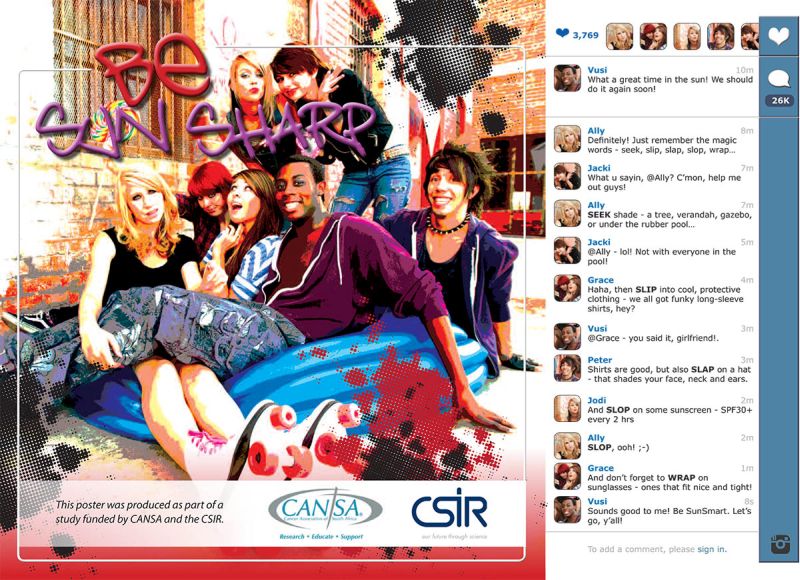 19 Jun 2014 | Published under: CANSA on the Move for the Youth, Research Projects, SunSmart