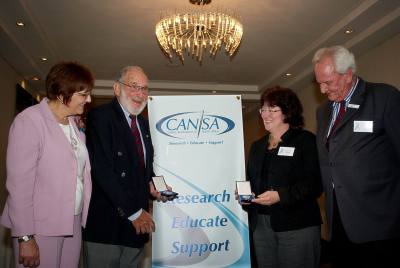 Bloch, internationally renowned as a gynaecologic oncologist, was honoured for his long service to a number of medical societies and committees, including an 18-year stint as council member and vice-president of CANSA, as well as three years as president of the association. He headed UCT’s Department of Obstetrics & Gynaecology for 10 years until his retirement in 1995.

In turn, Williamson was recognised for her work on the human papillomavirus, the leading cause of cervical cancer. Williamson is based in UCT’s Division of Medical Virology, where she also holds the chair in vaccinology under the South African Research Chairs Initiative.

The CANSA medal is named in memory of cancer-research pioneer Dr Alfred George Oettlé, who started a small research unit at the South African Institute for Medical Research. The unit grew and in 1958 became the responsibility of CANSA. Oettlé died in 1967 aged just 47, and CANSA established the AG Oettlé Memorial Medal in 1969.  Read more: History of Oettlé Memorial Medal.

Bloch and Williamson were presented with their medals from CANSA at the Women’s Health Conference in Johannesburg in early September.

27 Oct 2014 | Published under: Notice Board, Research Funding and Grants